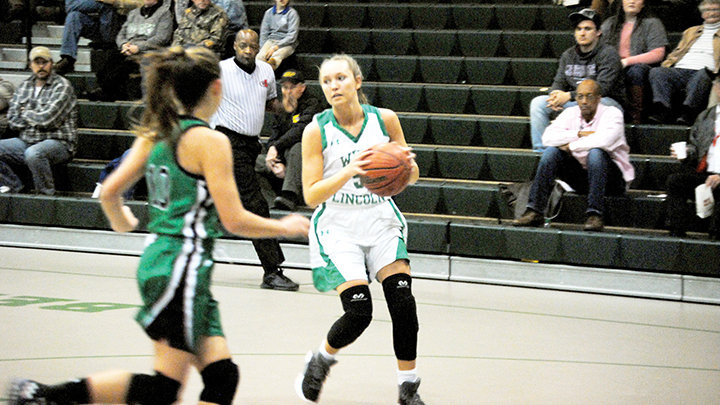 Photo by Dave Linton/West Lincoln junior Skylar Hall looks for help as she moves into position against Cathedral during Thursday night’s 66-35 home victory.

The Lady Bears of West Lincoln fired off a big first quarter and set a pace Cathedral’s girls couldn’t keep up with, winning Thursday night’s game 66-35.

The girls in green and white played a fast-tempo game and beat the Lady Green Wave to the board, soaking up rebounds and forcing turnovers on their way to a 21-8 first quarter. A seven-point run early in the second quarter forced a wide gap on the scoreboard and put Cathedral to bed early.

“I thought we did a great job on making our shots,” said West Lincoln coach Brooks Smith. “I’m real proud of how we bounced back from how we played the first time.”

The she-bears wasted no time finding the net, as they managed to sink a three-pointer to get on the board first. The Lady Green Wave responded with their own three-pointer and picked up a few early turnovers, but they were unable to capitalize. The Lady Bears showed no sign of slacking off on offense and defense, as they continued to win the rebound wars and cause turnovers of their own.

Early in the second, the score widened to 29-8 in West Lincoln’s favor before Cathedral was able to disturb the net again. The Lady Bears kept on dominating the boards, hampering any chance the Lady Green Wave might have had to close up, and took a 36-14 lead into halftime.

Whatever comeback plan Cathedral devised in the locker room fell apart in the third quarter. West Lincoln’s defensive machine couldn’t be stopped, and the girl waves kept on surrendering the basketball and were down 55-24 heading into the final period.

Cathedral got a few turnovers as they tried to ignite a fourth-quarter run, but once again the extra possessions amounted to little. With the game winding down, West Lincoln’s reserves hit the floor for mop-up duty. The waves had more success against the younger girls, but by then the game was already lost.

“We just got off to a bad start. We didn’t have the energy and no rotation or defense,” Cathedral coach Randy Smith said. “Our kids were sick, but that’s no excuse for having a terrible effort. I give West Lincoln credit. They shot the ball well.”

The Lady Bears had three players shoot in double digits.

The win improves the Lady Bears to 8-5 on the season. They begin Region 7-2A play against Amite County Friday night.

The Daily Leader sought to interview the top-performing Lady Bears players from the game, but coach Brooks Smith has prohibited his players from speaking to the press.