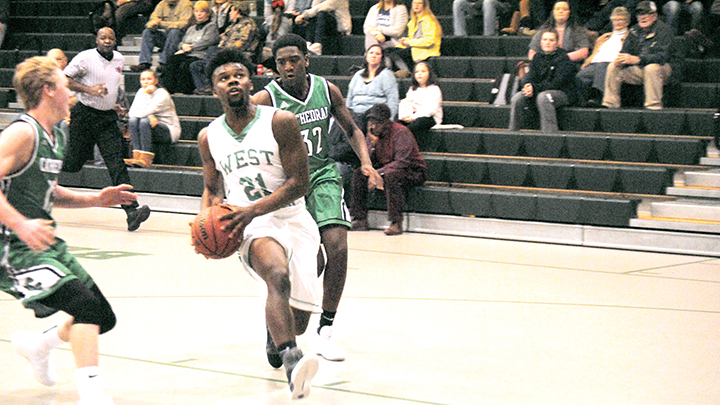 West Lincoln got off to a fast start and never looked back as they ran past Cathedral, winning Thursday night’s game 95-54.

A fast-paced offense and shots nailed from behind the arc propelled the Bears into high scoring altitudes. West Lincoln took the lead early and never slowed down, keeping their shooters hot throughout the game.

“Anytime you put up that amount of points, it’s a good thing. It was good to have the offensive night we had,” West Lincoln coach Brooks Smith said. “Real proud of the boys. The shot-making is what did it tonight.”

In a sign of things to come, West Lincoln quickly got on the board by draining a three-pointer. Cathedral brought themselves to within one point, 3-2, with a pair of free throw shots, but afterward the Bears’ offense took over and the Green Wave never got close again.

The Bears won the opening period 21-13 and beat up the boards to extend it early in the second. Cathedral started to get some turnovers going their way and tried to cut into the Bears’ lead, but West Lincoln stayed out front 43-30 at halftime.

Cathedral’s wheels came off in the third quarter. Although they scored first, the Bears weren’t dormant for long. West Lincoln started dropping three-point shots into the basket routinely. The Green Wave drowned in points, and the Bears carried a 74-40 lead into the fourth quarter.

The waves kept on beating the West Lincoln shore, but it didn’t do any good. The Bears continued to grab up rebounds and steals to drive up the score. They finally walked off the court with a 95-54 victory.

The win moves the Bears within a game of breaking even, as they stand at 6-7 on the year. They begin Region 7-2A play against Amite County Friday night.

The Daily Leader sought to interview the top-performing West Lincoln players from the game, but coach Brooks Smith has prohibited his players from speaking to the press.