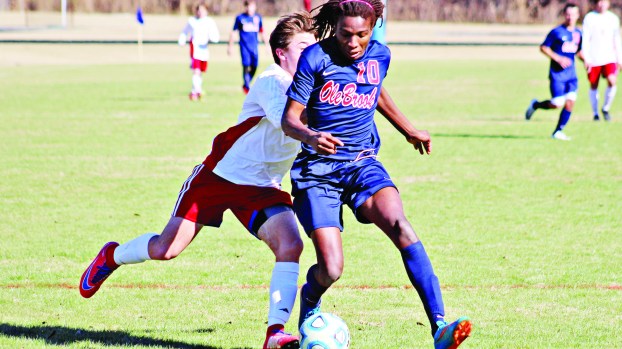 Brookhaven’s Adrian Lockwood (10) tries to shield the ball from a Warren Central player in the first half of Saturday’s game. Warren Central beat the Panthers 6-0. (Ernest Bowker/The Vicksburg Post)

For a long time Saturday, Warren Central looked every bit like a soccer team that had barely been on the field for 2 ½ weeks. Once the rust was shaken off, however, that went away in a hurry.

The Vikings scored four goals in a 14-minute span, found the net five times in the second half, and drubbed Brookhaven 6-0 in their 2018 debut. Braylen Greer had two goals and an assist, while Sean Dixon and Hank Holdiness each had a goal and an assist.

“We just started real slow. We could not finish. We couldn’t finish the whole game. But coach got on us during halftime in the locker room. It just took over from there,” Greer said. “We just started practice this past week. It had been a while since we played our last game and we only had, like, four practices over the break. Everybody was tired.”

Warren Central (12-3-3) was playing its first game since Dec. 21, while Brookhaven (12-4) was playing its second in less than 24 hours. Between the rust of the Vikings and the fatigue of the Panthers, the game was scoreless for much of the first half.

Greer finally broke the ice with a goal in the 38th minute, and it opened the floodgates for Warren Central.

Dixon scored off an assist from Karsten Keyes two minutes into the second half to make it 2-0. Holdiness and Josh Griffin also found the net over the next 10 minutes, giving the Vikings a 4-0 lead at the 52-minute mark.

Dixon and Greer scored again in the waning minutes of the game to cap the victory for Warren Central. Brookhaven keeper Sawyer Allen made 12 saves against 21 shots, but his teammates didn’t give much offensive support.

The Panthers had three shots in the first half and none in the second. WC keeper Chase Graham only had to make two saves.

“I think it came down to us playing a full game last night against a pretty tough team. Today, playing that first full half, they gave it all they could. I could tell our defensive line wore down as the game went on. They adjusted to how we were playing and were able to get around us,” Brookhaven coach Aaron Ayers said. “It’s nothing you ever want to go through, but it happens. It’s like a light switch. They turned one on and we didn’t.”

West Lincoln got off to a fast start and never looked back as they ran past Cathedral, winning Thursday night’s... read more