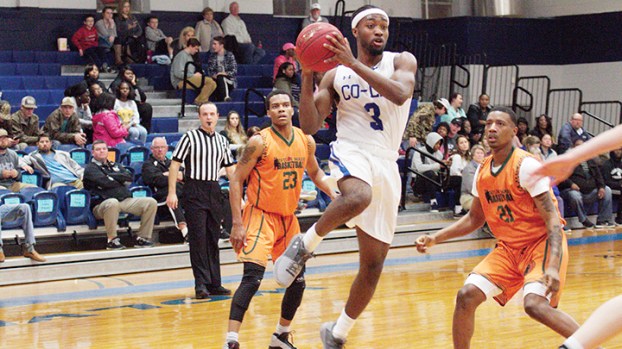 Photo by Co-Lin Athletics Department/Damarius Brooks, a freshman from Brookhaven, drives to the basket in Co-Lin's 110-62 win over Taylormade Academy.

The Copiah-Lincoln Community College Wolves started the second half of the 2017-2018 season on the right foot Monday night, as the Wolves blew by Taylormade Academy, a prep school located in Florida, 110-62 in Mullen Gymnasium.

The Wolves were on fire early in the contest as Co-Lin went on a blistering 25-4 run in the first eight minutes of play. The Wolves scored from all parts of the floor, including the free throw line, as Co-Lin rattled home four charity shots after two technicals were called against Taylormade.

Co-Lin’s fast-paced offense continued to roll in the remainder of the first half as the Wolves continued to rotate fresh legs onto the court. Co-Lin stretched its lead to 56-25 going into the locker room.

The second half was much of the same for the Wolves, as Co-Lin capitalized on most possessions and took advantage of every trip to the foul stripe. The Wolves finished the contest with a season high 93 percent (27-for-29) from the free throw line.

Taylormade caught a spark from Christian Agnew in the second half as he hit several three-pointers. Agnew’s hot hand was too little too late, as the Wolves had pulled away to nearly a 50-point lead midway through the half.

Youry White led the Wolves in scoring with 19 points. The sophomore also led the Wolves on the glass with nine rebounds. Jonathan Floyd was Co-Lin’s next highest scorer with 15 points.

Damarius Brooks, a freshman from Brookhaven, put up impressive numbers, posting 14 points, seven rebounds, and seven assists. Darrian Wilson and Lazorian McNulty rounded out the Wolves double-digit scorers with 11 points each. The Wolves also had a good outing from Tray Lawson, who was injured for the first half the season. Lawson scored six points and hauled in eight rebounds.

The win moves the Wolves to 9-1 on the year. Co-Lin is back in action Thursday as the Wolves travel to Perkinston to take on Mississippi Gulf Coast.