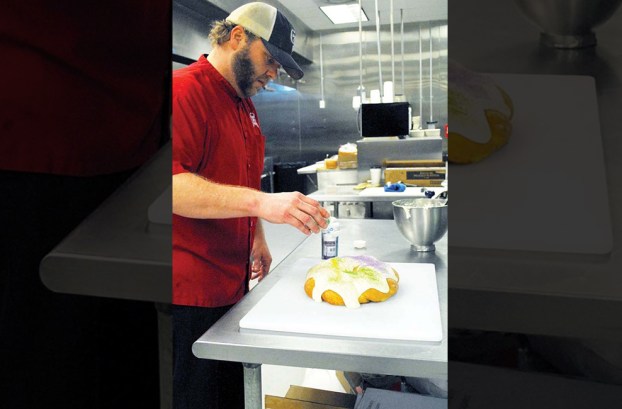 Walmart Brookhaven’s king cakes come in two sizes and are shipped directly to Mississippi from the NOLA Company in New Orleans. The smaller size costs $9.98 and the larger one is priced at $12.98.

“I’m not a big fan of king cake,” Walmart bakery manager Becky Hall said. “But ours are really good.”

Meanwhile, the staff at Sweeteez on West Monticello Street is busy whipping up their signature, homemade king cakes. They sell the cakes by the slice for $2.50 and whole for $25 to $30, depending on the filling type.

Whole king cakes should be requested at least 24 hours in advance of the desired pickup date.

Debra Harper, the head baker and deli manager at the Piggly Wiggly on Monticello Street, also makes king cakes from scratch. They come in a single size and cost $9.99.

“I bake them every day or every other day, depending on how fast we sell out,” she said.

Georgia Blue’s head pastry chef Becky Walden is classically trained and learned to bake from her mother and grandmother. She and head chef/co-owner Trey Maddox conducted a series of tests before settling on their king cake recipe.

“It’s made of a really silky pastry, painted on the inside with a brown sugar cinnamon butter,” she said.

Maddox created the Georgia Blue king cake in response to popular demand, and he is well pleased with the end result.

“We got a lot of requests for an actual king cake after people noticed our king cake cheesecake,” he said. “It’s turned out great.”

Georgia Blue is known for its cheesecake, and Maddox fills several of the bakery’s king cakes with his famous cream cheese mix.

“The bakery was built around Chef Trey’s cheesecake,” Walden said. “He came across his recipe by mistake, but it’s probably the best mistake ever made.”

Maddox makes plain, cheesecake-filled and strawberry cream cheese-filled king cakes. They come in a small size that costs $14.95 and serves roughly six people, and they are also available in a larger size that costs $32 and feeds roughly 15 people.

“We wanted our dough to flake apart on the inside,” Walden said. “It tears really easily.”

Georgia Blue Bakery takes king cake orders 24 hours in advance of pickup, but, starting Friday, they will have four or five grab-and-go cakes for sale every day.

“The freshness is important,” Walden said. “It comes directly out of our oven onto your table.”

Her daddy may be “Doc” to the masses, but LaRenda Janee’ Harrison is now the doctor in the family. Harrison... read more