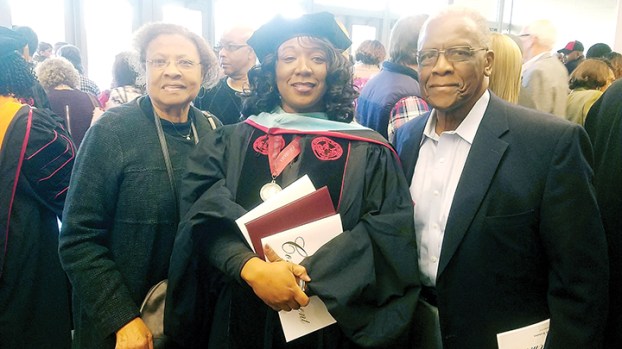 Photo submitted/LaRenda Janee’ Harrison, director of alternative services for the Brookhaven School District, received her doctorate of education recently from the University of Alabama in Tuscaloosa as her parents, longtime Brookhaven educators, cheered her on. Pictured are, from left: Clementine Harrison, Janee’ Harrison and Doc Harrison.

Her daddy may be “Doc” to the masses, but LaRenda Janee’ Harrison is now the doctor in the family.

Harrison is director of alternative educational services for the Brookhaven School District with an office at Fannie Mullins School.

When she received her doctorate of education from the University of Alabama in Tuscaloosa recently, her parents — Willie “Doc” and Clementine Harrison — were there to cheer her on as she accepted her accolades.

Harrison grew up in the Brookhaven School District where her mother taught sixth-grade English and language arts at Lipsey Middle School and her father was assistant principal at Brookhaven High School.

“Doc” became her dad’s nickname a long time ago.

“People would talk to him about their problems. He’s a problem solver,” she said.

Harrison graduated from BHS as salutatorian with plans to study engineering at Mississippi State. She even attended MSU on an engineering scholarship, but by her second year in she found her interests didn’t lie in physics and calculus.

She changed her major to education her sophomore year. Switching her course of study made a huge impact on her life.

“In the grand scheme of things, this is exactly where the Lord would have me be,” she said.

Harrison earned her undergraduate degree in educational psychology with a minor and certification in English from Mississippi State.

She started her teaching career in Houston, Texas, then came back to Brookhaven, where she taught English at her alma mater. She also served as the yearbook sponsor.

Students were drawn to her and frequently looked to her for guidance. That led her to pursue her master’s degree in guidance counseling, which she earned at Mississippi State.

She later earned her educational specialist degree in educational administration from the University of Alabama.

She took a job in Tuscaloosa County, Alabama, where her loyalty as a Bulldog was put to the test.

“I’m a Tide fan when they’re playing anyone but Mississippi State,” she said.

Bama’s win Monday night had her hooping and hollering in front of her television, she said.

After a divorce, Harrison’s parents visited to help her downsize from a house to an apartment. It was then that she decided to move back to Brookhaven to be closer the people she considers her role models. She had already started the doctoral program at UA so she continued that while working in Brookhaven.

She started the job at Fannie Mullins in 2014.

As director of alternative services for the district, Harrison oversees the education of students from the third-graders to seniors who come to Mullins with behavioral issues. They can be in her program for two days up to 45 days with extended placement.

She is also over the GED program for the district.

Harrison draws on what she’s learned from her role models — her parents.

Her mother was big on making sure students put their best self forward in all aspects from dress to actions.

Her father is full of wisdom.

“His favorite mantra is ‘You must be fair, firm and consistent,’” she said. “Daddy is big on discipline and compassion. I’m a good mix of the both of them.”

Harrison begins each day with prayer for the students she will encounter. She treats each one as an individual. She believes in a one-size-does-not-fit-all approach.

“Behavior issues don’t define a student. What defines you are is what you do with it,” she said.

She enjoys the challenge of working with a generation who doesn’t know a world without internet. She said educators must engage, motivate, learn and inspire students, “and it will not come by doing what we’ve always done.”

Harrison is an active member at St. James M.B. Church in Brookhaven and is also active with her sorority, Alpha Kappa Alpha.