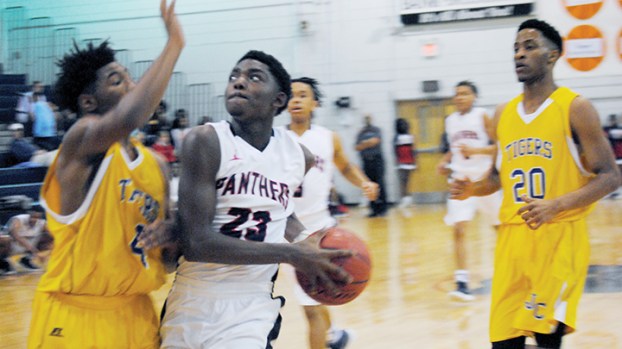 Photo by Dave Linton/Ole Brook junior Lafollette Bogan keeps his eyes on the basket while driving against a defender in Tuesday night’s 65-51 Brookhaven win.

Ole Brook used an up-tempo offense to get the better of Jefferson County Tuesday evening, jumping out to an early lead and fending off the Tigers for a 65-51 home victory.

The Panthers played a tremendous first quarter, running up 27 points to Jefferson County’s 12 before the opening frame was over. The Tigers played a tenacious second and reversed the tables, adding 18 points to Brookhaven’s dozen to close the home lead to 39-30 at the half, but Ole Brook controlled a much calmer second half and wound down to the win.

“The boys executed and were able to get the ball inside to make easy shots,” Brookhaven coach Marcus Flippin said. “They did a good job tonight and I’m proud of them. We had lost four out of the last five, so we needed this win.”

Brookhaven did an excellent job of team play, taking in 37 total rebounds and feeding in 18 assists. The team’s 18 turnovers were a little on the high side, but the blow was softened by 11 steals.

It was bad news for Jefferson County early on, as a technical foul in the game’s opening minutes allowed Ole Brook to get on the board first. The Panthers hit an eight-point run before the Tigers found the net, and by then Brookhaven’s full-court press was on, Jefferson County had problems, giving up 27 points and scoring only 12 in the first quarter.

The Tigers mounted their second-quarter comeback with defense, creating turnovers and chipping away at the Brookhaven lead. Jefferson County tacked on 18 and trailed 39-30 at the half.

The Tigers managed a four-point run in the third quarter, but Brookhaven’s offense took over after that, scoring 16 and taking a 53-40 lead into the final quarter. Jefferson County was out of options, and Ole Brook ended up with the 14-point win.

The win takes Brookhaven to 10-9 on the season, and they remain 0-1 in Region 6-5A. They will travel to Jackson Friday to take on regional opponent Forest Hill.

Jefferson County will make the short trip to Port Gibson Friday night for a Region 7-3A battle.

The Copiah-Lincoln Community College Wolves started the second half of the 2017-2018 season on the right foot Monday night, as... read more