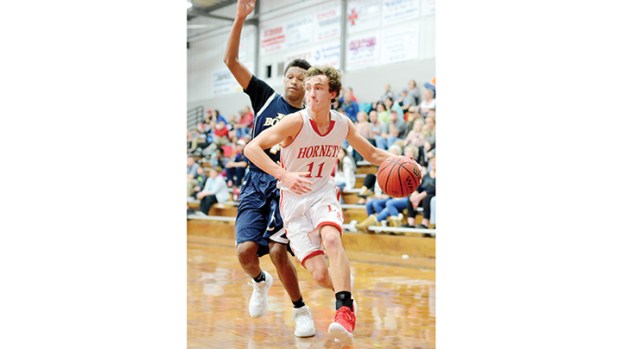 Photo by Adam Northam/Hornets junior Jett Calcote (right) tries to get the angle on Bobcats sophomore Josh Thomas in Tuesday night’s 61-53 Loyd Star win. The game was the first in Region 7-2A competition for both teams.

The break is mended. The sling is gone. The basketball uniform is clean and white, ready to soak up sweat.

Patrick Price is back on the court.

Loyd Star’s senior forward has been rehabbing a broken collarbone since Oct. 26, when a West Lincoln tackler ended his stellar football season and kept him out of basketball throughout November and December.

Now at 100 percent and cleared to play, Price came back on the court Tuesday night for the first time since last season and scored 10 points in the Hornets’ 61-53 win over Bogue Chitto, helping move his team to 1-0 in Region 7-2A competition.

“It feels good. It’s good to have my first game back at home in front of the fans,” Price said. “It’s taken me six weeks to get ready, but I had a few good days of practice over the holidays.”

Price’s return to the starting lineup immediately gave the Hornets some extra quickness and lightened the load on its shooters, and the speed showed against the Bobcats. Loyd Star dominated the second and third quarters, building up enough of a lead to survive a furious Bogue Chitto comeback attempt late.

Loyd Star entered the fourth quarter leading 47-29. The game felt done, but the Bobcats unleashed 24 points in the final eight minutes. The Hornets called timeouts to break Bogue Chitto’s building momentum and kept on scoring, managing to stay around 10 points ahead of the Bobcats’ attack.

“At the beginning of the second half we were conservative with our timeouts, so at the end we had some timeouts left to game plan with,” said Loyd Star junior Dane Smith.

The plan called for a spread-style offense. The Hornets hung around the wings and looked for one-on-one cuts into the paint. The strategy resulted in lots of passes around the perimeter and a running clock. It ended on the Hornets’ final play when Smith flew to the basket for the game’s final points on a sweet throw-in from junior Jett Calcote.

“We slowed down and made our passes,” Calcote said. “It was all about making good passes, getting good shots and blocking out.”

If they hadn’t adjusted, Bogue Chitto might well have won the game. The Bobcats took the ball inside in the fourth quarter, feeding junior center Malik Richardson, a 6-foot-5 monster who scored seven baskets in the last eight minutes alone.

Loyd Star had trouble matching his size in the paint, but the Bobcats couldn’t put together a defensive plan to keep the Hornets away from the basket. The home team put up 14 points late — just enough to keep Bogue Chitto’s big run from turning the game. Big wins in the middle of the game — a 20-11 second quarter and an 18-8 third — had the Hornets playing king of the hill on a pile of points.

“We did well coming off the holidays. We’ve got everyone healthy and we’re a different team than we were before Christmas,” said Loyd Star coach Gene Britt.

Bogue Chitto coach Mark Pitts said his Bobcats are capable of better play, and he’s expecting them to step up their game.

“We’re still fighting a little immaturity. We’re a young team — we have no senior leadership, so we’re learning as we go,” he said. “We’ll get better.”

Calcote led Loyd Star in scoring with 14 points, and he led in assists with four. Smith was next with a dozen points. He also commanded the boards with 11 total rebounds. Junior Zabian Price had 11 points that included a pair of three-pointers.

The Hornets pick up their fifth win of the season to stand at 5-7, and are 1-0 in Region 7-2A. They travel to Enterprise for another Lincoln County region game Friday night.

Bogue Chitto falls to 6-11 on the season and 0-1 in region play. The Bobcats host Amite County for a region game Tuesday night.

The Daily Leader sought to interview the top-performing players from Bogue Chitto, but coach Mark Pitts refused to make them available.

Ole Brook’s Lady Panthers fired off a dominant first half of basketball against Jefferson County, trapping the visiting Tigers in... read more