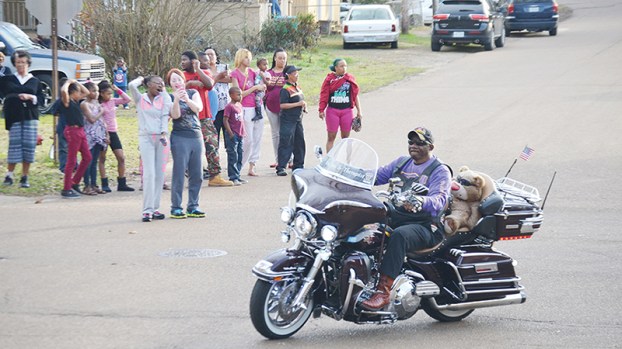 Many Americans will pause Monday to reflect on the life and ministry of Martin Luther King Jr.

On the federal level, MLK Day was first officially observed in 1986, but the holiday wasn’t fully recognized by all 50 states until 2000. It generally serves as a time of national unity and private contemplation.

When she was a young woman in Chicago, Bernetta Character — president of the Lincoln County NAACP — twice marched in peaceful protest alongside King. The potency of his moral conviction and the depth of his social consciousness made a lasting impression on her.

“Dr. King was a person who wanted to help everybody,” she said. “Race didn’t matter to him, and he stood up for everybody’s rights.”

The motorcade will commence on Minnesota Street — in front of Williams’s Mortuary — and proceed up Second Street before turning onto the Old Wesson Road. From there, it will continue down Dr. Martin Luther King Jr. Drive and turn south onto Beauregard Street, stopping in front of Alexander Junior High School.

Between 50 and 100 locals are expected to participate, and Character said the procession will include a broad swath of Lincoln County society.

“Everybody is invited to come out and participate,” she said. “The parade will celebrate Dr. King’s belief in nonviolence and unity.”

According to Rev. Kendall Poole, the Lincoln County Ministerial Alliance will host a program directly after the NAACP procession at St. James Missionary Baptist Church on Monticello Street.

The event, dubbed “Together We Stand, Divided We Fall,” should begin at 6 p.m. The gathering will honor King’s life as a Christian minister, and Rev. Eugene Edwards will be the program’s keynote speaker.

Similarly, Lawrence County’s NAACP will observe the holiday by hosting its second annual MLK walk/race in Monticello Saturday. Registration begins at 8 a.m., and the walk starts at 10 a.m.

Monticello Mayor Martha Watts looks forward to the upcoming festivities, and she hopes people will take a little time to consider the enduring impact of King’s legacy.

“I commend our community leaders that have been dedicated to keeping Dr. King’s messages alive over the years through events such as the annual MLK breakfast,” she said. “Remembering our history is so very important to our future.”