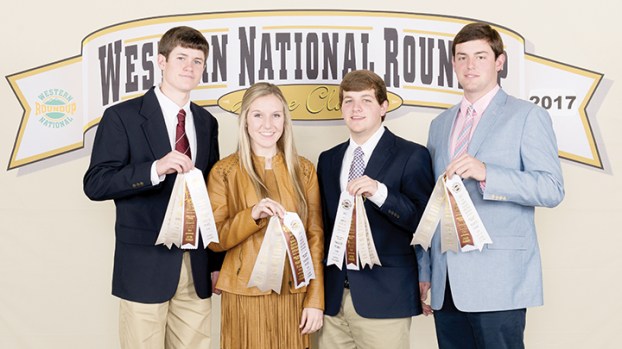 Photo submitted/Pictured are, from left, Lincoln County 4H members Jacob Johnson, Anna-Michael Smith, Walker Williams and Will Watts showing off their ribbons after being ranked No. 8 in the nation during the horse-judging competition at the Western National Roundup in Denver, Colorado, this past week.

They were livestock kids. They grew up handling cattle. Only the girl had worked with horses before.

But they wanted a challenge. So Lincoln County 4-H members Jacob Johnson, Anna-Michael Smith, Will Watts and Walker Williams got together in the first half of 2017 and formed a horse-judging team, devoting their last year in the program to the study of Equus caballus.

On June 21 they won first place in Mississippi and the right to compete in the Western National Roundup in Denver, Colorado. They went to the mountains last week and came home as the No. 8 horse judging team in America.

“I am really proud of these kids,” said Lincoln County 4-H Extension Agent Jennifer Williams, the team’s coach. “It was pretty exciting for them to step out of their comfort zone and compete in horse judging, to expand their knowledge and their experiences.”

Their calculations and opinions, or “reasons,” were tallied and compared against the marks of a four-judge panel of the nation’s most respected equestrians.

The Lincoln County group beat out the representatives of other states that were built by men on horseback, including California, Nebraska and Utah. The No. 8 ranking came from a fourth-place finish in reasons and ninth-place finishes in performance and confirmation.

Forty-five students competed in the event.

Smith, now a freshman at Mississippi State University, said she was nervous about her first trip to nationals, particularly about the reasons portion of the contest.

“I’m pretty good at placing, but I was worried about the talking end of it,” she said. “But we finished a lot higher than we expected.”

Smith said she hoped the team’s finish would encourage other Lincoln County youth to get involved in 4-H judging events.

“Lincoln County has some students who can be pretty good at this,” she said.

Watts was a member of the Lincoln County team that finished eighth nationally in livestock judging at the same competition last year, the highest a Mississippi team has ever placed. He’s now a freshman at South Plains College in Levelland, Texas, attending on a scholarship awarded through livestock judging.

“We weren’t really horse people, but we are dedicated to judging,” he said. “It feels good to represent Mississippi well. That was our main thing — to be competitive and try to give Mississippi a good name.”

Tate Felder has played his last down for Brookhaven Academy football. The senior defensive back graduates this spring with plans... read more