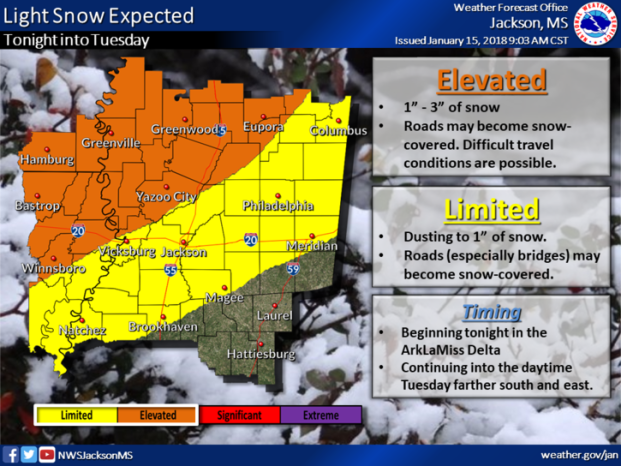 Lincoln County should get ready for another blast of winter weather. The National Weather Service in Jackson says the area could get up to 1 inch of snow, especially along and northwest of the Natchez Trace corridor.

The weather service says bridges may become snow-covered, which could lead to dangerous driving conditions.

Lincoln County is just barely in the area expected to get snow, with the southern portion of the county just outside the affected area.

Light snow is expected to occur across the state, beginning in the Delta tonight and spreading southeastward during the daytime Tuesday.

Lincoln County is not currently included in the Winter Storm Watch, which will go into effect later today. The watch area includes Copiah, Jefferson and Adams counties, as well as areas north and northeast of Lincoln.

Temperatures will remain near or below freezing during the day Wednesday, with wind chills below 10 degrees Wednesday morning.