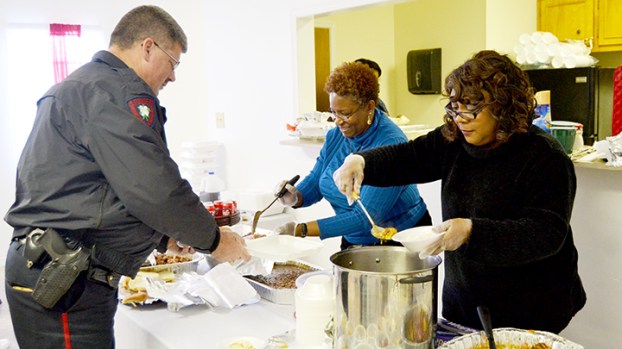 Photo by Donna Campbell/Maxine Battles dishes up some barbecue for Lt. Rob Smith of the Brookhaven Police Department Monday at the second annual Boots and Badges lunch at Beulah Chapel M.B. Church. Pictured are, from left: Smith, Battles and Scherry Godbold.

The food and the memories were plentiful.

The members of Beulah Chapel M.B. Church made sure of that. Pastor Charles Caston smoked a Boston butt and others in the congregation filled the table with baked beans, potato salad, gumbo and banana pudding. If that wasn’t enough, a huge pan of cherry cobbler sat ripe for the picking.

It was all for the second annual Boots and Badges lunch the church held in honor of the late Calvin Carter and Hardy Thrasher, deacons who served together at Beulah Chapel and died just two and a half weeks apart, leaving behind a legacy of good works church members try to duplicate even now.

To honor the service of Carter and Thrasher, Beulah Chapel hosted an appreciation lunch Monday for first responders from the Lincoln County Sheriff’s Office, the Brookhaven Police Department and area fire departments.

Brookhaven Police Chief Kenneth Collins showed up at the noon hour with hugs and a hearty appetite. The ladies in the serving line filled his to-go container.

“Rev. Caston and Beulah Chapel started this to show their appreciation to the men and women in law enforcement,” he said. “It makes you feel special to know that the public is behind you. Without the people in the community, we couldn’t do what we do, that’s what it’s all about.”

Carter’s nephew, Arlandus Brown, said he wants to follow in his uncle’s footsteps. He shook hands with men and women in uniform who came by for lunch.

“I want to shake their hand and thank them for what they do, day in and day out for us,” he said. “What they do doesn’t go unnoticed.”

It’s what his uncle and Deacon Thrasher would have done.

“Before they passed, they always thought we should take care of our law enforcement officers and first responders,” he said.

He said church members hope to continue this tradition and plan to hold the Boots and Badges lunch each Martin Luther King Jr. Day.

“I want to thank Pastor Charles and Beulah Church for honoring two men who truly loved the Lord and their church family,” Quinn said.

The Lincoln County School Board has rescheduled its monthly meeting again because of school cancellation today. The meeting will now... read more