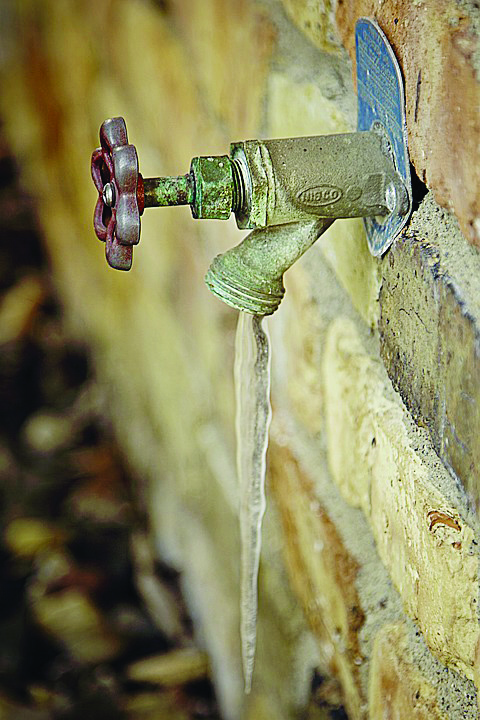 Cold weather causes plenty of difficulties for homeowners, but no problem is trickier in frigid temperatures than fixing a frozen water line.

The best way to safeguard your home’s water system is to insulate outside pipes and leave faucets dripping during a cold snap, said licensed and certified plumber Dorsey Cameron of Cameron Plumbing in Brookhaven. But, despite precautions, pipes sometimes fill with ice. Water swells when frozen, and, as it expands, ice can seriously damage both metal and plastic conduits.

Cameron, who is also Ward 1 alderman for the city of Brookhaven, advises home and business owners to leave water running when temperatures dip below freezing.

“The main thing is make sure you let your water run,” he said. “A lot of people think they can turn on one faucet. This kind of weather, you need to turn on everything — your bathroom, your kitchen, your outdoor faucet. This is some serious cold weather we’re having right now. “

“The rule of thumb is let the stream be the size of a pencil,” he said.

He also suggests running at least one faucet with hot water, too, because hot water pipes can freeze faster than cold water pipes. It will cause the water heater to run more, but it will still be less expensive than a plumber’s bill for frozen pipes, he said.

According to the American Red Cross, if you turn on a faucet after a hard freeze and only a trickle of water comes out, your water line is likely frozen.

Once you locate a frozen pipe, it’s best to keep the faucet turned on. That way, water can evacuate the line as the ice begins to melt.

If one of your house’s pipes is frozen, others may also freeze. So, pay close attention to your home’s water pressure before, during and after a cold snap.

You can thaw an icy, undamaged pipe by wrapping an electric heating pad around the frozen section of the water line. Electric hair dryers, portable space heaters and towels soaked in hot water also do a good job of melting ice.

When using an electrical heating device out of doors, be sure to keep its plug away from water to prevent electrocution. Experts also discourage the use of blowtorches, kerosene or propane heaters or other open flame devices for thawing pipes.

Keep an appropriate heat source applied to the affected area of a pipe until full water pressure is restored. If you cannot locate the frozen area, if the frozen area is not accessible or if you are unable to thaw the pipe, the Red Cross suggests contacting a licensed plumber.