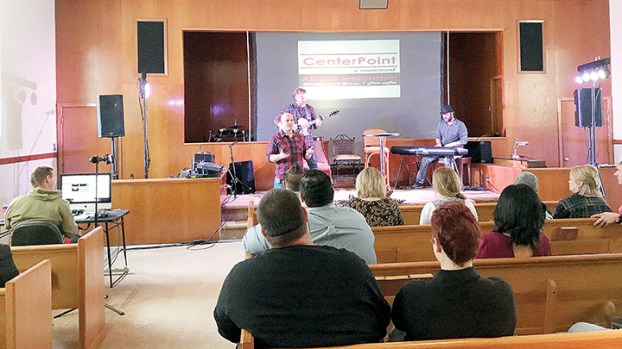 Photo submitted/CenterPoint Church moved from Industrial Park Road to the 640 Halbert Heights Road in space the Lincoln County Baptist Association made available to it. Pictured are, from left: Pastor Ricky Breazeale, Topher Brown and Marvin Curtis.

CenterPoint Church: ‘We want people from all walks of life’

A Brookhaven church started the new year with a renovation of spirit and purpose.

CenterPoint Church made the move from Industrial Park Road to 640 Halbert Heights Road on Dec. 31, bringing with it members dedicated to spreading the gospel with others in the community. Meeting in the building that belongs to the Lincoln County Baptist Association, they have room for expansion, said pastor Ricky Breazeale.

“It’s a building that suits us better,” he said. “We can accomplish more ministry in that building.”

The church was started about eight years ago. Breazeale and his family — wife, Jessica, and 6-year-old son, Walker — attended there for several months before he took over as pastor recently when Rev. Eric Brown retired.

It was a chance to start some new programs and make some changes, he said.

“We’re reinventing the church, starting from scratch. It’s basically a replant of a church that was planted,” he said. “We’re trying to make it a more outward focused church. Mostly we exist to make a difference in the community.”

Breazeale already had Topher Brown, former guitarist for The Band Perry, on board as worship leader.

“He’s a local legend around this area,” he said.

Steve Herron joined them as children’s pastor just in time for the church to launch a new ministry called Kid’s Place Live for children age 4-11. They’re using the Gospel Project curriculum which immerses children and pre-schoolers in the gospel through stories and theological concepts. Through the Gospel Project, Breazeale hopes children will understand the Bible is not just a collection of stories, but one unified story—God’s story of redemption.

“You are welcome to bring your precious little ones to KPL as we equip the next generation of ambassadors of Christ,” he said.

Breazeale said their children’s ministry allows youngsters to connect with others.

“Our goal is to teach our children how to live missional lives and fulfill the great commission,” he said.

While CenterPoint is part of the Lincoln County Baptist Association, the church doesn’t identify with any particular denomination.

The goal for CenterPoint is to be available to people of all denominations.

“We want people from all walks of life,” he said.

The atmosphere is laid back. Worship style is contemporary. There’s no dress code and coffee is served. They strive to make everyone feel welcome.

“We want people to come as they are and bring their baggage,” he said. “If the church isn’t there to accept people how they are with their baggage and their flaws, then we don’t need to exist in my opinion.”

Breazeale would like to see pews filled with people of different races.

“We talk about how we as a church can build bridges between races, and not just black and white. I think we tend to alienate those who don’t look like us and talk like us,” he said.

Sunday worship service is at 11 a.m. Unlike other churches, there’s no Sunday night or Wednesday night service. Instead they have missional communities that meet Monday and Wednesday nights.

Instead of studying from a book in a classroom, people in missional community groups go out into public places to spread the Gospel. They’ll meet at a restaurant or go to a movie and pull whoever’s around them into their conversations.

“We do life together and when you’re out in those circles, bring others — your waitress, someone at the table next to you — and bring them along,” he said. “Meet them on their terms and at their places. What if we actually met out in the community, went to open mic night on Wednesday nights, gather in a fun outgoing environment and meet people? We try to meet people where they are.”

The goal is to see people get plugged into their local church.

“We’re hoping to be disciples who create disciples,” he said.

He said the church is opening doors for individuals who didn’t feel they could minister to others. He said one woman who attends is organizing a project to provide teenage girls with prom dresses and makeovers. Another is starting a food pantry.

“It’s opened doors for those who may not believe they could be a minister. God has called everyone to do the work of ministry,” he said. “A lot of people say ‘I’m not good enough. I’m just a waitress. How can I possibly change the world?’ We try to get them pass that. It doesn’t matter what you do. His name can change the world.”

Attendance has grown from about 45 people to 110 since they moved. Sunday they’ll center their service around baptism. At least nine people will be baptized during the service.

“It’s just going to be a huge celebration,” he said.

For the past two years, Rep. Becky Currie, R-Brookhaven, has dedicated much of her legislative energy to establishing a Mississippi... read more