Sen. Sally Doty, of Brookhaven, is in the race for U.S. Congress 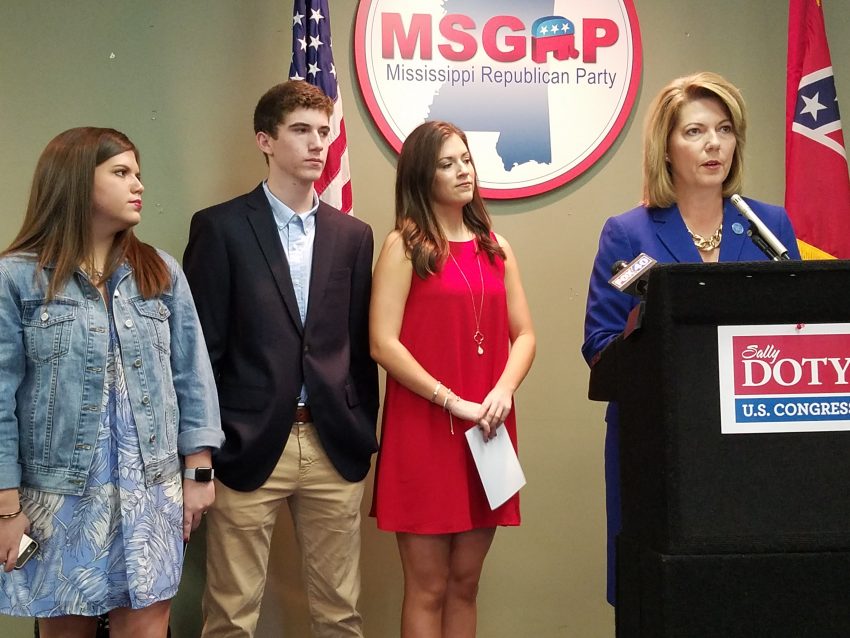 Photo by Donna Campbell/Sen. Sally Doty is joined by her three children Jan. 22 at the Mississippi Republican Headquarters in Jackson as she announced her bid for the 3rd District U.S. Congress seat. Pictured are, from left: Sarah, Ben, Ellen and Sally Doty.

A Brookhaven attorney and Mississippi senator filed paperwork Monday at the Mississippi Republican Headquarters in Jackson, making her bid for the 3rd District U.S. Congressional seat.

Sally Doty, 50, was then joined by her children — Ellen, Sarah and Ben — as she  announced her candidacy at a press conference downstairs.

The two-term senator for District 39 was also joined by her campaign manager, Hunter Foster, and Zach Harveston, her aide-de-camp.

Doty’s late father, Sgt. 1st Class Charles Burchfield, was an Army tank commander during the Korean War. She said part of the reason she wants to run for Gregg Harper’s seat is to be a voice in Washington for veterans and American families.

“Enough is enough,” she said. “I’ll stand with President Trump to roll back regulations on our small businesses, to cut government handouts and reduce spending, just like I’ve done across the street here in the Mississippi Senate. I will fight to protect our military and our veterans, stand up for our families, put in the work and defend our traditional family values.”

A seventh-generation Mississippian, Doty said she has a track record of holding people accountable and passing common sense conservative legislation.

“I led the charge to reform campaign finance laws in Mississippi, and as chair of the Senate Elections Committee, I worked with my colleagues to pass a comprehensive bill to modernize our election laws,” she said. “When Mississippi had the highest rate of teen pregnancy, I was one of the only people willing to say, ‘We can do better,’ and look for solutions.”

Doty’s children represent various levels of education. Ellen Doty, a Mississippi State University graduate, will be attending the University of Mississippi Medical Center School of Dentistry, Sarah Doty is a sophomore at Ole Miss in the Trent Lott Leadership Institute and Ben Doty is a senior at Brookhaven High School.

“As a state senator, a small business owner and a mom, I know how difficult it is to balance a budget,” she said, “But Washington can’t continue to play games with our seniors, our military and especially our children. We need real conservative leaders who can pass a balanced budget, reduce the deficit and put America first.

“We’ve started turning this country around but there’s much more to do. The stakes are high.”

The three other Republicans running are Michael Guest of Brandon, Whit Hughes of Madison and Perry Parker of Seminary.

Guest is a district attorney in Madison and Rankin counties. Hughes is past deputy director of Mississippi Development Authority, the state agency that seeks to promote job creation, and most recently worked as foundation president and chief development officer for Baptist Health Systems. Parker has managed investment portfolios for 30 years.

The 3rd Congressional District covers central portions of the state and stretches from the Louisiana border in the west to the Alabama border in the east.

Large cities in the district include Natchez, Meridian, Starkville and Pearl. It also includes most of the wealthier portions of Jackson, including the portion of the city located in Rankin County. The district also includes Mississippi State University.

Doty said she’s looked at the numbers that Guest and Hughes could draw from Rankin and Madison counties, two of the most populated areas in the district.

“I’m very realistic about the numbers. I know what they are,” she told The Daily Leader. “This is a big district and we will all be getting our message out.  I believe the voters are looking at your background, your experience, not just where you live. I look forward to getting my message out. The numbers don’t lie. It will be a challenge, but it’s one that we’re willing to take on.”

Doty said that she talked with her children about the scrutiny that comes with a campaign of this nature.

“We know this is a big day and it’s a big decision for my family,” she said. “We’ve talked about it, we’ve prayed about it and we know how difficult a campaign is. But we are all in.”

She said her family understands that every part of her life will be scrutinized. Doty said she believes voters will look at her qualifications and experience, rather than aspects of her personal life.

“I think my legislative background will set me apart from the other candidates,” she said.

Doty has represented Lincoln, Lawrence, Copiah and Walthall counties in the Senate since her election in 2011.

She was recently appointed by Lt. Gov. Tate Reeves to serve as chair of the Energy Committee.

Doty will not have to step down as state senator unless she wins the election.

One suspect in custody, two more remain at large…