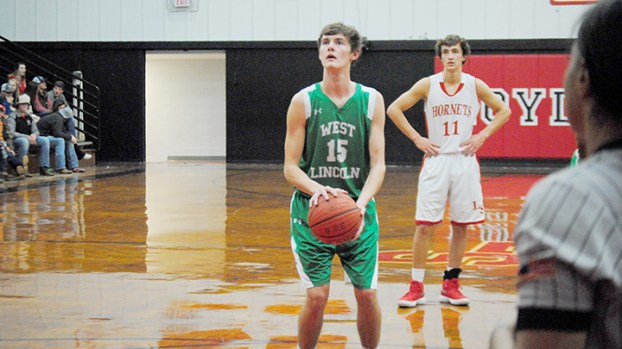 West Lincoln Bears come from behind against Loyd Star Hornets

The Bears roared in a huge second half at Loyd Star Friday night, coming from behind to steal a 60-41 win from Loyd Star.

West Lincoln’s offense turned it up a notch in the second half, outshooting the Hornets 47-17. Loyd Star tried to get back some of its first-half mojo but was unable to muster enough offense to stay even with the Bears.

“We scored more points in the second half by ourselves than what Loyd Star scored the whole game,” West Lincoln coach Brooks Smith said. “If we do that for two halves, then we’re in good shape. I thought we moved the ball better in the second half and got better shots.”

Loyd Star started off fast, finding the net first. The Bears were unable to get into the scorebook until halfway through the first period, but fought back strong in the final minutes of the opener to trail 11-10 going into the second quarter.

It took more than two minutes in the second period before either team managed to score, with Loyd Star breaking up the scoreless drives. The Hornets started to get warm as they were able to build onto their lead, keeping the Bears off the board until a minute left before halftime.

With time running out before half, West Lincoln attempted to cut into the lead, but watched as the Hornets led 24-15 at the buzzer.

The third period saw the Bears come out hot, as they were able to hold Loyd Star in check and limit the Hornets to just three points. West Lincoln came out of the third on top 37-27, and Loyd Star was in trouble.

The Bears stayed hot in the final period, outshooting Loyd star 23-14, despite the Hornets attempting to make it into a game. West Lincoln won by a final score of 60-41.

“In the third quarter it seemed like we couldn’t do anything right. We couldn’t make shots and couldn’t pass the ball,” Loyd Star coach Gene Britt said. “West Lincoln got their momentum going and were making their shots, and they hurt us pretty bad on their three-pointer shots. First half we outplayed them, the second half they outplayed us.”

Loyd Star will be in action tonight as they take on Region 7-2A opponent Amite County.

West Lincoln will also be in action tonight as they take on Region 7-2A foe Bogue Chitto.