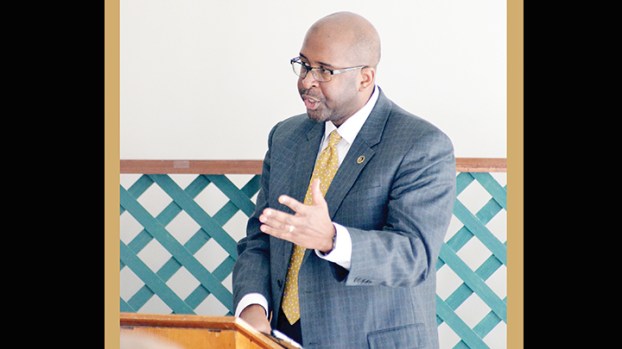 School funding needs ‘not a fantasy’

University of Southern Mississippi President Rodney Bennett told a gathering of civic clubs Tuesday that the state’s universities have to live within their means while at the same time recognizing that more funding is needed.

Bennett was in Brookhaven to address the clubs, just one day after he joined the state’s other university presidents in Jackson for a meeting with lawmakers regarding funding.

Bennett became USM’s 10th president in 2013, and, since his installation, the university has been forced to cope with the lingering effects of budget cuts. At the end of the recent fall term, the institution was dealt an $8 million decrease in funding.

“Without having both enhanced resources from state appropriations and some additional investment and cost-of-attendance from parents and families, our longstanding efforts to provide Mississippi students with a high-quality, competitive education will erode,” Bennett told lawmakers, according to a Jackson Free Press story. “This is not a fantasy rooted in theatrics.”

Bennett was reluctant to talk specifics about education funding during Tuesday’s meeting in Brookhaven.

“We have to live within our means,” he said. “I have been committed, since day one, to making fiscally responsible decisions for the university.”

The eight university presidents asked lawmakers for an additional $103 million more (16 percent increase) for the next budget year. But current budget recommendations call for universities to receive 15 percent less.   University presidents told lawmakers that the state could fall further behind the nation economically if its universities can’t keep pace.   Leaders of the state’s 15 community colleges are making a similar case, noting they eliminated 270 positions, including layoffs, and raised tuition by an average of 13 percent last spring. Copiah-Lincoln Community College President Ronnie Nettles told lawmakers that cuts “threaten access to many Mississippians and threaten the quality of the programs we offer.”

Bennett told lawmakers that even if Mississippi universities get more state money, they will to have to keep raising tuition to keep up. Tuition and fees for in-state university students rose 6.6 percent on average last year, although many students don’t pay full price thanks to federal, state and college aid.

Bennett spent most of his time in Brookhaven Tuesday discussing USM’s plans to bolster commerce and tourism along the Mississippi Gulf Coast, the so-called “blue” economy. The school recently launched bachelors programs in computer and ocean engineering to help support coastal industries.

“Our work along the coast furthers USM’s position as the leading coastal research institution in Mississippi,” Bennett said. “And we have enhanced and expanded our relationship with the Port of Gulfport.”

Gov. Phil Bryant has concentrated much of his agenda on developing Mississippi’s maritime sector, and, in response to that push, Bennett said USM is working to enhance its engineering and costal research programs.

“There is no doubt that much of our future is tied to our coast line,” he said.

Bennett believes USM has the unique opportunity to help mold South Mississippi’s economy. With tourism, fishing, oil and gas exploration and shipbuilding blossoming along the coast, he looks forward to preparing local students for lucrative careers.

“As a university, our greatest opportunities lie ahead of us, not behind us,” he said.

National CRNA Week is underway, and local nurse anesthetists are spreading the word about their line of work. The unofficial... read more