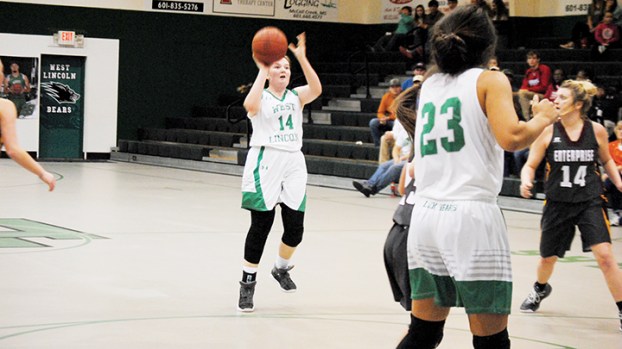 Photo by Dave Linton/West Lincoln junior Elizabeth Stogner takes a shot for the net during the Lady Bears’ shutdown of the Enterprise Lady Jackets.

The win moves the she-bears to an overall record of 12-5 and keeps them undefeated in the region, while Enterprise drops to a still-impressive 9-2 overall and takes their first region loss to go 2-1.

The Lady Jackets struggled throughout the game to get shots to fall. West Lincoln took advantage of this to outscore Enterprise in every period.

“I thought the girls played better in the second half and were more focused,” Lady Bears coach Brooks Smith said. “We got to cut out on some fouls a little bit, but overall I thought we did a good job.”

West Lincoln struck first and began to build on their lead before the Lady Jackets stretched the net. Enterprise tried to slowly chip away at the Lady Bears’ lead, but West Lincoln took the first quarter 13-6.

The Lady Bears continued to build on their lead in the second period, while the Lady Jackets fought to stay in the game. West Lincoln led 25-12 going into halftime.

The third period saw much of the same as the second, with the Lady Bears holding a 36-16 lead at the end of the third. The final period saw the she-bears continuing to add onto their point total, as the Lady Jackets struggled to get baskets. West Lincoln walked away with a 48-28 victory.

Enterprise will be in action Friday, as they head to Liberty to take on Region 7-2A foe Amite County.

West Lincoln will also be in action Friday, as they head up to Madison to take on Region 4-5A Germantown.

There is crying in basketball. Not much. Just enough tears to make a moment special. Lady Panthers’ senior Taylor Carter... read more