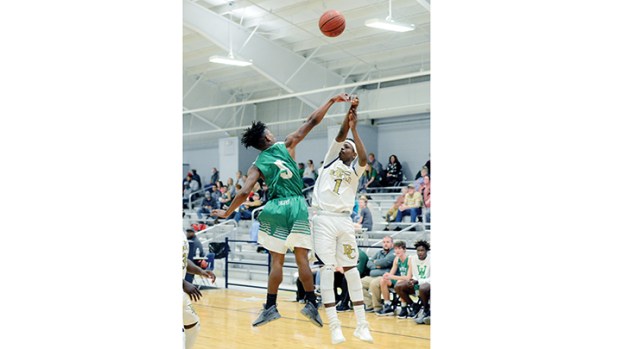 Photo by Adam Northam/West Lincoln senior Ledarrius Jones slaps away a shot from Bogue Chitto junior Jermaine Black Tuesday night in the Bears’ 70-52 win. The Bears have won three games in a row.

The Bears started to pull away late in the first quarter and went on an 11-1 run that lasted until halfway through the second, giving their shooters the confidence to fire up the basketball with the lead. The Bobcats were down by 14 points at halftime and a hard-won third quarter was not enough to close the gap, as West Lincoln brushed aside the Bogue Chitto defense in a 17-point fourth quarter.

“That was a good win. We want to put up that many points, and we’re hard to beat when we do,” said West Lincoln coach Brooks Smith. “Our goal is to score 15 points per quarter, and we can be tough to beat if we do it consistently. We’re playing right where we need to be right now.”

Good ball management was key for the Bears, who protected their possessions and found sneaky ways to get open shooters and bodies down into the post. The team turned the ball over only 13 times and offset that number with 11 steals. Nine assists went to shooters and the green jerseys snagged 29 boards.

All that firepower resulted in a 20-11 first-quarter lead for the Bears and a nearly-as-good 17-12 win in the second quarter. Bogue Chitto fought back to take the third 17-14, but West Lincoln’s shooters developed a good rapport with the net and took the final period 17-12.

Bogue Chitto coach Mark Pitts said his team’s effort was strong, and he’s proud of their willingness to battle until the final buzzer. But he called their 39 percent shooting “dismal.”

“Very dismal. And we were 40 percent from the free throw line. These are recipes for the result we got tonight,” he said. “We’re still young and fighting through a bunch of stuff, but we should be better than we are. We’re not finishing games like we need to.”

Pitts promised heavy discipline for Thomas, who lost his cool in a verbal exchange with an official late in the game.

West Lincoln is 10-8 on the season and 3-1 in Region 7-2A. They travel to Germantown Friday night.

The Daily Leader sought to interview the top-performing West Lincoln players from Tuesday night’s game, but coach Brooks Smith has prohibited his players from talking to the press.