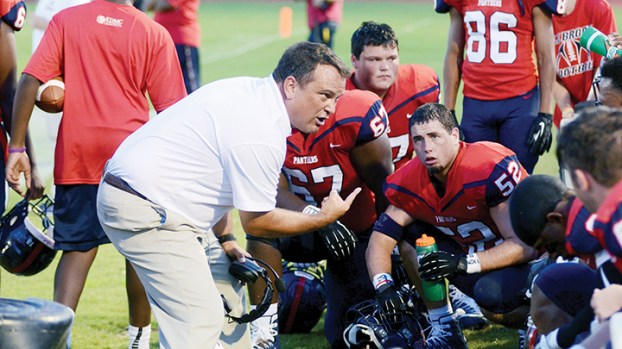 Daily Leader file photo/Pictured is Brookhaven head football coach Tommy Clopton talking with his team during a timeout in a game from this previous season. Clopton announced Wednesday that he is stepping down from the football program to concentrate on being a father. Clopton will remain at Brookhaven High as athletic director.

Tommy Clopton has stepped down from his position as head coach of the Brookhaven High School football team.

Clopton made the announcement Wednesday morning during a called meeting at the high school, saying he needs to step away from coaching to have more time to see his son, Southern Miss freshman Trace Clopton, compete on Saturdays as a member of the college’s football team.

“I’m looking forward to the opportunity to watch Trace. He’s played 40-some-odd games for me and I’ve never watched him play. I was too busy working,” Clopton said. “The only time I got to see him was when I watched film.”

Clopton will remain at BHS as athletic director and take over assistant principal duties for the 2018-2019 school year. He’s coached seven seasons for the Panthers beginning in 2012. The team went 43-29 under his direction, including an 11-2 season in 2017 that ended in the second round of the 5A playoffs.

Rumors of Clopton’s resignation as football coach have simmered around Brookhaven for months, but the coach said he never considered leaving the Panthers’ top spot until very recently.

“When it became a reality, when we packed Trace up and moved him into the dorms, things began to change. My priorities changed,” he said. “All of us go through different seasons in our life. I’ve been a coach and a dad for 20 years. I am very fortunate the Brookhaven School District has allowed me to move into an administrative role, to still be involved in athletics but to have more time to be a dad. Change is not easy, but sometimes it brings a breath of fresh air into a program.”

Clopton said BHS would begin advertising the head coaching vacancy statewide immediately. There is no timeframe on the search. Clopton will remain head football coach during the search and will hand the program over when a candidate is hired. He anticipates widespread interest in the position and plenty of potential coaches from which to choose.

“The head coach at Brookhaven is one of the top jobs in the state,” he said.

Clopton said his focus as athletic director will be to serve the other coaches and make sure their programs aren’t wanting.

“I’ve never looked at this job as, ‘ the boss.’ Now that the opportunity is there, I will sit down and evaluate each program again and tell each coach, ‘What can I do to help you?’” he said. “We have quality coaches in all our programs. They don’t need to be micromanaged.”

“This has worked out well for all of us. We’re very pleased Tommy is still going to play a big part in our school district,” he said.

“We’re proud to have him join us over here on the office side,” he said.

“Us juniors, all we’ve known is coach Clopton,” he said. “We love him. We knew he was going to bring it to the table every day — he wasn’t going to half-do anything. I hope our next coach is somebody with the same intensity, who cares just as much as he did.”

“That’s just part of being a family. You have to live with change,” he said. “Over the past three years with the tragedies and everything else we’ve had to face, one thing my class has learned is how to put one foot in front of the other and keep pressing. We’re going to miss coach Clopton a lot. He was a father figure to most all of us.”

Down but not out, the Lady Bobcats came from behind, beating Region 7-2A rival Enterprise Monday by a final score... read more