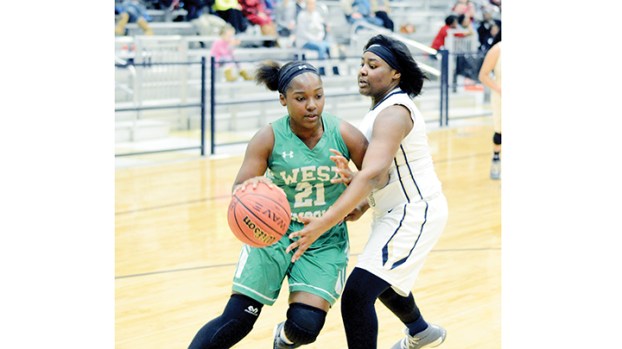 Photo by Adam Northam/Lady Bears freshman Brittany Sturkey tries to get by Bogue Chitto senior Lineka Newson in Tuesday night’s 47-25 West Lincoln victory. The Lady Bears are the only undefeated team in Region 7-2A.

The girls in green stood atop a 21-4 halftime lead that proved insurmountable, despite the Lady Bobcats winning a pitched third-quarter battle 17-12. The dozen-point gap at the beginning of the fourth quarter was as close as the game ever got, and the Lady Bears turned it on in the final period for another 14 points, while limiting Bogue Chitto to just four.

“Our record says we’re pretty decent. I feel like though we’ve won the last couple games, we can be better,” said West Lincoln coach Brooks Smith. “It’s not only about how we look against Bogue Chitto, but against the Pucketts of the world. Right now, I don’t know. We’ve got some work to do.”

Pucketts of the world notwithstanding, the Lady Bears played solid against Bogue Chitto. The team pulled down 47 total rebounds and shared nine assists. Five steals helped offset 19 turnovers, the only stat line trending the wrong way for West Lincoln.

For the Lady Bobcats, everything trended wrong early on. The Bogue Chitto girls seemed to be able to get up and down the court and even had success getting to the key, but once there they found the basket covered by a heavy lid. They managed only four first-half points to West Lincoln’s 21.

The score was stable through the first two minutes of the third quarter, with neither team able to put together a successful possession.

Frustration got the better of Smith with 6:19 remaining in the third quarter when he walked out onto the court demanding details about a foul called on a Lady Bear for holding. The down-court official told him twice to return to the coach’s box and whistled a technical on the West Lincoln coach when he refused.

“Sportsmanship,” was the official’s only reply when asked about the call.

Unfortunately for the Lady Bobcats, they bricked both free throws from the technical and missed on the free possession. It wasn’t until 4:59 remaining in the third that they added their first points since halfway through the second, but the mid-game dam burst and the Lady Bobcats fired off 17 in the bottom half of the quarter. West Lincoln scored along with them and still led 33-21 at the start of the final period.

Any hope of a Lady Bobcats comeback ended early in the fourth. Through a series of fouls, missed shots and West Lincoln rebounds, the Bogue Chitto girls got trapped on the wrong end of the court. The Lady Bears went to the stripe five times for a 7-0 run.

“We played well in the third quarter, but in the other three quarters we stunk offensively,” said Lady Bobcats coach Christi Terrell. “We were nine of 71 shooting. That’s not supposed to happen. West Lincoln is probably the best shooting team in the county. We just have to keep working and practicing.”

The Lady Bears are the leading girls’ team in Region 7-2A, standing at 13-5 on the season and 4-0 in region play — the region’s only undefeated squad. They’re on the road Friday night at Germantown.

The Daily Leader sought to interview the top-performing West Lincoln players from Tuesday night’s game, but coach Brooks Smith has prohibited his players from talking to the press.