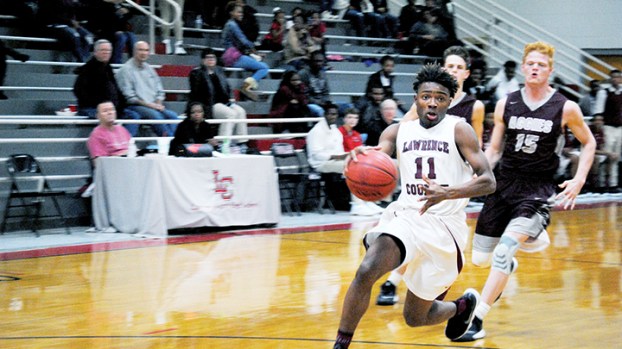 The Cougars managed to hold onto a slim lead going into halftime. Whoever could come out of halftime hot and stay hot would have the advantage. Lawrence County’s defense stepped up to the plate and helped deliver the Cougars a win over the Aggies.

“We were off to start the game, but our defense stepped up and won it,” said Cougars senior guard Reggie Statham.

The game saw the first two minutes go scoreless. The Aggies were the first on the board, hitting two free throws. The Aggies held the Cougars to just one point for most of the first period.

With time running down, Lawrence County managed to score once again. The Aggies led 8-3 at the end of the first period.

The Cougars’ offense hit some spurs in the second quarter, maintaining a chance to stay in the game. Halfway through the first half, Lawrence County had dropped their deficit to just two points, 13-11, and took a 15-13 lead into halftime.

“I felt like we kept battling to the end. The guys kept playing hard,” said Lawrence County coach Pat Bridges. “The shots just didn’t want to fall in, but we won it on the defensive end.”

Playing in a tight game, the Cougars’ defense took over in the second half, scoring off turnovers. The Aggies kept it a close game, as Lawrence County led only 31-28 going into the fourth period.

Despite the Aggies threatening to take over the game, the Cougars’ defense was able to hold them at bay. Lawrence County was able to walk away with a 49-40 win.

Lawrence County will be in action Friday as they take on Purvis in Region 7-4A action.