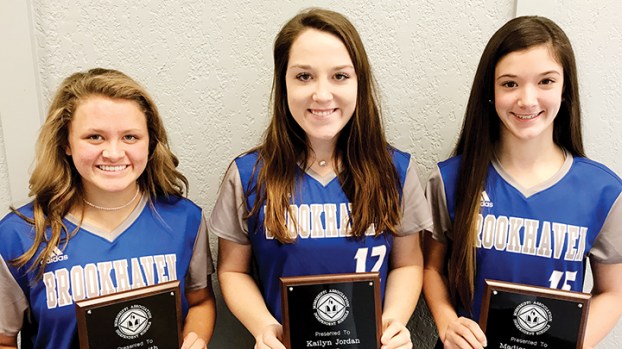 Photo submitted/Lady Cougars softball players Madi Smith (left), Kailyn Jordan and Madison Moak were named to the MAIS AA All-State Softball Team for their performances during BA’s fast-pitch season in the fall of 2017.

Senior Kailyn Jordan, freshman Madi Smith and eighth-grader Madison Moak have been named to the Mississippi Association of Independent Schools AA All-State Softball Team, recognized for their parts in the academy’s record-breaking season last fall. The team went 22-17-2 and finished as runner up in South State, becoming the first BA squad to appear in a state tournament, the first to win 22 games and the only team that hung a loss on the state champs from Marshall Academy.

“It was a great year for our program, an amazing experience for our team with only four players who have a driver’s license competing at the varsity level,” said BA softball coach Becky Flowers. “These three ladies were a big part of our season, along with 12 others who stuck it out through 100-degree temperatures, rainouts, illnesses and a state champion-packed schedule.”

Jordan, the team’s shortstop and leadoff hitter, is a six-year starter for the Lady Cougars who is committed to Southwest Mississippi Community College. In addition to making the All-Star team, she was named AA MAIS Region 3 Player of the Year after the 2017 season, in which she compiled a .455 batting average, a .511 on-base percentage, recorded 55 hits and stole 20 bases.

“Kailyn and I were sometimes oil and water, but she’s a ferocious competitor and I’m glad she was on my team,” Flowers said. “She’s a hard out to make — she can hit it 250 feet for a homerun or bunt it three feet and user speed. I’m proud of her maturity and leadership, and she will be hard to replace.”

Smith, one of the team’s pitchers, recorded a 2.35 ERA and had 100 strikeouts. On offense she batted .282, had a .321 on-base percentage and led the team with 33 runs batted in. With Smith in the circle, the Lady Cougars beat Division 1 4A champion Jackson Prep 3-2, tied 3A champion Silliman Institute and held 2A champions Marshall Academy to five hits over two games.

“She puts her team on her back when our offensive production is slow, and that’s impressive for a 14-year-old,” Flowers said. “She has pitched as much varsity softball as many senior pitchers. I can’t wait to watch her future unfold.”

Moak, the team’s center fielder, is a hitter. Her batting average last season was .402, leading to an on-base percentage of .432, and she struck out only eight times in 143 at-bats, best on the team. In the outfield, her fielding percentage was .925.

“Madison’s ability to hit for average and use her speed to get on base has been a major contributor to our offensive production,” Flowers said. “She’s a fierce competitor, and her speed and athleticism make her a fantastic outfielder.”