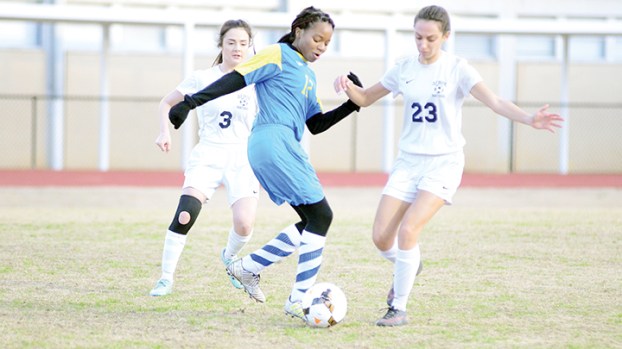 On senior night, the Lady Panthers’ upperclassmen played for a combined 40 minutes, fighting long and hard to take down the Lady Bulldogs of Natchez 3-1.

Defense was the key for the she-cats throughout the game. The Lady Panthers allowed only one goal to get past them in the second half before completely dominating the remainder of the game.

The first half was a defensive battle. Both teams pressed the ball down the field and had plenty of chances to score, but neither team was able to capitalize.

Despite both teams pressing hard and fast, it took until just seven minutes left in the half for the game to have its first score, as the Lady Panthers finally managed to get behind the Lady Bulldogs’ defense and sail in the first goal of the game.

The she-cats kept pushing the ball and soon found themselves rewarded, as they managed to get another goal in with just three minutes remaining before halftime. The Lady Panthers led 2-0 heading into halftime.

The Lady Bulldogs came out of halftime and managed to get their only goal of the night before both defenses settled in for a long battle.

The teams went back and forth on attempted scoring drives for the rest of the game. As time was winding down, the Lady Panthers scored the final goal of the game to win by a final score of 3-1.

Brookhaven will be in action Tuesday as they head to Forest Hill to take on the Patriots.

Ole Brook scored at will on senior night Thursday, taking down Natchez hard by a score of 6-1. Natchez had... read more