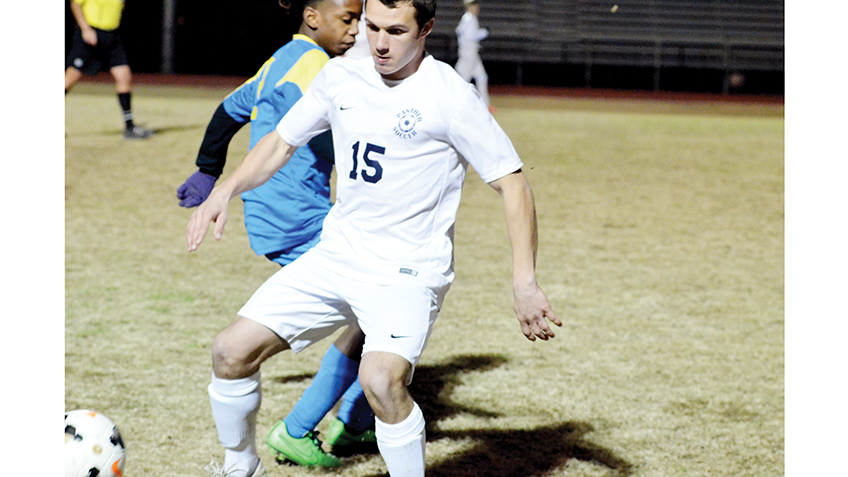 Photo by Dave Linton/Panthers senior Tyler Mixon (15) drives the ball past a Bulldog defender during Thursday night’s 6-1 victory over Natchez at home.

Ole Brook scored at will on senior night Thursday, taking down Natchez hard by a score of 6-1.

Natchez had no answer for the Panthers’ offense. Taking the field after halftime, Ole Brook kept the Bulldogs guessing on what they were going to do, scoring six unanswered points to wash out the bad taste of a scoreless start.

The Bulldogs got behind Ole Brook’s defense to score their only goal. It didn’t take the Panthers long to wake up and rapidly score two goals of their own, taking the lead and never feeling pressure again.

Ole Brook scored its third goal in the half on a penalty shot before both teams’ defenses settled in to prevent any more points being scored before halftime.

The Panthers came out after halftime with a mission — get the ball down the field quickly and get more points. Ole Brook managed just that to start the second half, getting behind the Bulldogs’ defense to score their fourth goal of the game.

The Bulldogs’ defense settled down some, keeping the Panthers away from their goal. This didn’t last long, as Brookhaven once again managed to push the ball down the field and behind the defense to score their fifth goal of the game.

Natchez did have several scoring opportunities, but Ole Brook kept denying them, determined to keep their points from being answered.

The Panthers scored their final goal of the night with 10 minutes left in the game, before they turned the game over to their defense to prevent the Bulldogs from getting any more points.

When it was all said and done, Brookhaven had won the game 6-1.

Brookhaven will head to Forest Hill on to take on the Patriots Tuesday.