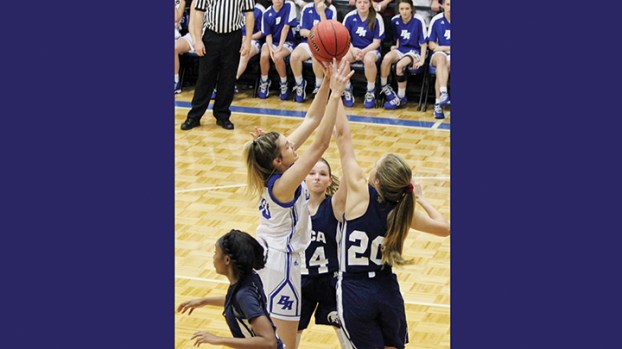 Photo by Emily Phillips/Sophomore Whitney Watts goes up for a shot while heavily guarded by Clinton Christian.

Brookhaven Academy’s Lady Cougars came within one point of tripling up Clinton Christian, running over the Lady Warriors on their way to a 65-22 victory Friday.

Brookhaven took a commanding 29-6 lead against Clinton Christian in the first quarter and dished out more of the same in the second, heading into halftime with a 43-16 lead. The girls in white added 14 points to their total in the third quarter, while limiting Clinton to just two points. The Lady Cougars maintained their massive lead to finalize their win against the Lady Warriors 65-22.

“We were playing well, and we had to keep it up,” Watson said. “If there’s anyone we wanted to beat, it was them, and it honestly felt really good.”

Watson led the Lady Cougars in rebounds with 10. Case, Warren and Rials had seven, four and two rebounds, respectively. Smith and Martin both had five rebounds, and Jordan, Crosby, eighth-grader Emily Claire Felder and Watts each had one.

Crosby led BA in steals with six. Case, Watson and Smith had five, four and three steals, respectively. Martin and Warren both had two steals, and Jordan and Felder each had one.

“We wanted to beat them so bad,” Jordan said. “We never gave up.”

Brookhaven Academy will travel to Clinton Thursday for another opportunity to play Clinton Christian. Junior High girls will tip off at 4 p.m.

Playing from behind against the Region 7-2A Lady Trojans, the Lady Yellow Jackets fell Friday night by a final score... read more