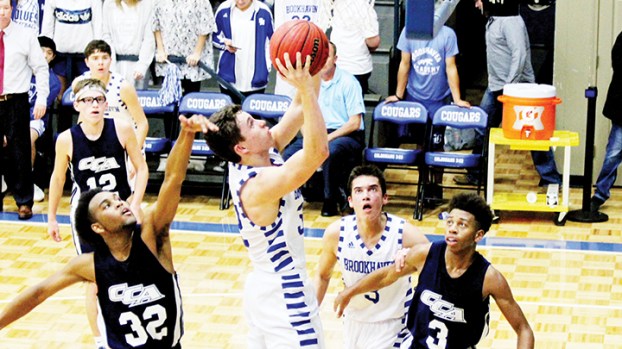 The Cougars had a slow start, allowing the Warriors to jump into the lead. Clinton Christian had an unusual group of starters, which included a seventh grader, K.J. Sykes. Brookhaven was a little hesitant to put pressure on Sykes due to the massive size difference, and it showed in the first quarter.

Brookhaven struggled against Clinton Christian in the first quarter and were down 12 – 10.

Junior Cade Brown started the second quarter with an impressive dunk, giving the Cougars a much-needed shift in momentum. They were able to keep their energy in the third quarter, nearly doubling their score.

“My dunk turned the whole game around,” said Brown. “After that, you weren’t stopping us.”

The Cougars found momentum and edged out the Warriors, heading into halftime 27 – 21.

The Warriors became desperate once BA increased their lead, and the Cougars were sent to the free throw line for a chance at 23 points. Clinton’s head coach received a technical foul with 2:41 left in the fourth quarter, followed by another technical foul on one of Clinton’s players. The free shots allowed BA to further increase their lead.

BA added 17 points to their total in the third quarter, only allowing Clinton seven points.

The fourth quarter was all cleanup duty for the Cougars, who slammed the door on the Warriors in a 19-4 final period.

“Fundamentals are always important, especially at the end because being able to pass, catch and execute makes a big difference,” said BA coach Josh Watts. “It’s a hard situation to be in [with Sykes]. You’d think it’d be an advantage towards us, but it’s really not. It hurt us a little bit that we couldn’t put much pressure on him, but I told them not to think of him as a seventh grader, just get down there and guard him like anybody else.”

Brown led the Cougars in rebounds with 11. Flowers and Nations had seven rebounds each. Felder, Jackson and Nelson had three, two, and one rebound, respectively.

Jackson led BA in steals with three. Brown had two steals, while Flowers, Felder and Nations each had one steal.

Brookhaven Academy will travel to Clinton Thursday for another opportunity to play Clinton Christian. Junior high girls will tip off at 4 p.m.

Brookhaven Academy’s Lady Cougars came within one point of tripling up Clinton Christian, running over the Lady Warriors on their... read more