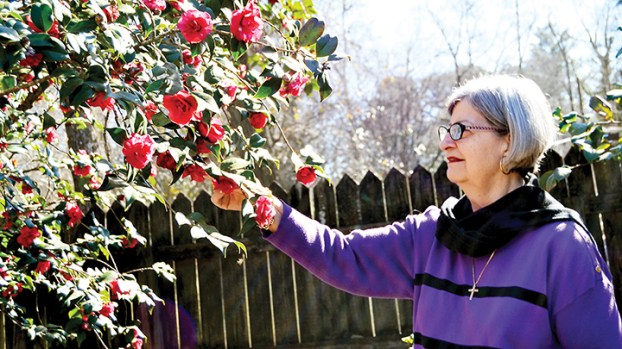 Photo by Donna Campbell/Shirley Estes inspects one of her dozens of camellia trees in her yard Tuesday for suitable blooms to enter into the 55th annual Brookhaven Camellia Show Saturday. The freezing cold weather in recent weeks has kept many of the flowers from blooming.

The freezing cold weather wreaked havoc on Shirley Estes’ camellia trees and may have nipped her chances of producing a prize-winner in the proverbial bud.

But Estes, like many of the other members of the Brookhaven Camellia Society, is hopeful some warm temps this week might make for some beautiful blooms in time for Saturday’s show.

The 55th annual Brookhaven Camellia Show will be open to the public from 2 to 5 p.m. at the Brookhaven Recreation Center on Hwy. 51.

The contest is free to enter and the event offers free admission as well.

Dozens of judges from the Coastal region are expected to attend and that’s a good thing, said show chairman Homer Richardson.

With so much snow this season, he’s not expecting a lot of local entries. Many of the judges bring blooms to the competitions, he said, though they don’t judge their own categories.

“They’ll have blooms that withstood the cold, or they grew them in a greenhouse,” he said.

That won’t stop them from having a good show though, he said.

The Brookhaven Camellia Society hosts a hospitality room with coffee and treats made by members so visitors can sit and discuss camellias with amateurs and experts.

A category for youngsters returns this year.

Entries will be accepted from growers from kindergarten to 12 years old. They’ll only be judged against others in their category, he said.

“We started it last year to get some of the young people in there to encourage them when they get older to grow camellias,” he said.

There is also an identification table for growers to bring unidentified blooms for judges to look at after the show. Richardson will call the individuals with the name of their flower so they can properly mark the plants.

Another treat for members and the public is the appearance of camellia vendors like Mizell’s Camellia Hill Nursery from Folsom, Louisiana. They will be returning to the show with a trailer load of one-gallon pots starting at $10.

Richardson said the Mizells always leave with an empty trailer because members like to add to their collections.

“That’s one of the things they do,” he said.

Richardson should know. Since he and his wife, Lynn, moved to Brookhaven in 1989, they’ve added over 100 trees to their property.

Lynn Richardson grew up in Franklin County, but she and her husband spent most of their pre-retirement years in Pennsylvania and New Jersey and other Northern areas where the only camellias to be found are grown in greenhouses.

She knew she wanted to plant camellias when she came home to Southwest Mississippi.

Homer Richardson tells the story of how he first learned about camellias.

“Lynn went to the show and came home and said, ‘You should see all the blooms down there.’ I said, ‘I guess I’ll have to. They just called and said you won one of the plants’,” he said, laughing.

He said the variety is a big draw for camellia enthusiasts.

His wife loves this time of year, too.

Unfortunately, the cold weather took out several of her shrubs this season and the deer got the others.

“The deer love camellias,” she said. “If you want to attract deer, plant camellias.”

Estes hopes to enter the contest. She’s draped white protective cover over some of her favorite plants — the Don Estes blooms named for her late husband.

Estes said her husband, a legendary Brookhaven athlete, enjoyed growing flowers with her.

“He was my big, hunky football player and he got into camellias with me,” she said.

She looked around the yard she and her husband had landscaped.

“They’re trying so hard to be beautiful,” she said. “This is their reason, to bloom and show off for us.”

Bills authored by local legislators that benefit farmers and would designate the Brookhaven Country Club as a resort area took... read more