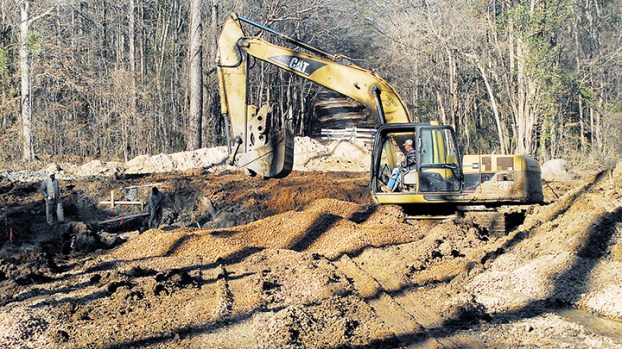 Much attention has been given to the condition of Lincoln County’s infrastructure, and — in a bid to stabilize area roadways — the Board of Supervisors is currently revamping three local bridges.

Supervisor Doug Falvey, who represents District 5, said one of the bridges currently under construction lies on Antioch Lane. Lincoln County’s Oddee Smith Construction, Inc. is responsible for updating that structure. They contracted with Fordice Contruction of Vicksburg to do culvert work.

“I feel good about the progress we’re making on our bridges,” he said. “We’ve been talking about it for a long time, and we’re starting to see results.”

According to Falvey, the old Antioch Bridge has been torn out and preparations are being made in order to install a new structure. He estimates the new bridge should reach completion in the next 30 to 45 days.

“We’re planning to move on to the bridge on Bouie Mill Road in the next three weeks or so,” he said.

Crews are also working to replace bridges on Walley Lane and Mt. Zion Road. According to county engineer Ryan Holmes, the Walley Lane site is in the process of being cleared.

Holmes said Randy Emfinger is overseeing construction on the Mt. Zion bridge, and work on that structure is underway. However, no approximate completion date was given for construction on Walley Lane and Mt. Zion Road.

“The people have been very understanding,” Falvey said. “I’ve had very little complaint about bridge construction.”

Since August, the Lincoln County Board of Supervisors has repaired or replaced 12 bridges. Five local bridges are currently under contract, five more are up for bidding and a further 17 are in design.

The bridges targeted for repair under the project were closed by out-of-state engineering firms contracted through the Mississippi Office of State Aid Road Construction at the command of the USDOT. The inspections fall outside supervisors’ regular four-year inspection cycle, and are being carried out without input from the county engineer or supervisors’ knowledge, they say.

Supervisors approved a $5 million bond to pay for bridge work, among other things.

Bills authored by local legislators that benefit farmers and would designate the Brookhaven Country Club as a resort area took... read more