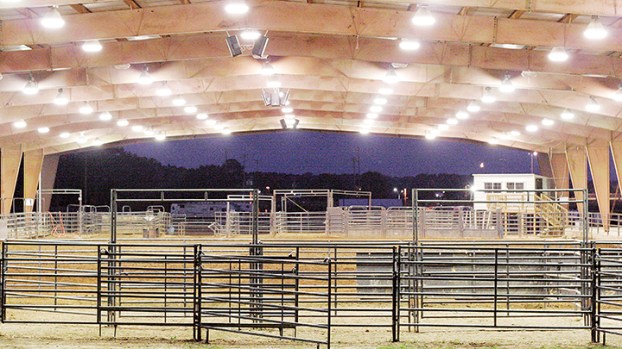 The Lincoln Civic Center is undergoing a series of much-needed renovations.

The comprehensive construction plan is divided into three separate projects, all geared towards preserving the center’s long-term, functional integrity.

Quinn Jordan — facility manager over the Lincoln Civic Center — said the first undertaking, which involved an overhaul of the complex’s bathrooms and kitchen, recently reached completion.

“We did our homework on what would give us the best bang for our buck,” he said. “We did as much in-house work as possible and refurbished whatever we could to help keep costs low.”

The project totaled $10,000 and was paid through existing budgetary dollars.

“We used some local donations and a portion of our budgeted funds to remodel our bathrooms and kitchens,” Jordan said. “We really wanted to continue to reinvest in our infrastructure.”

The civic center will soon undergo an extensive lighting upgrade, too. As part of the improvement, new LED lights will replace less energy-efficient lighting systems in all three of the center’s buildings.

The first phase of construction is expected to last 30 days, and work should commence Feb. 5.

“Our contractor will be able to work Monday through Thursday each week,” Jordan said. “That way, we can maintain the weekend usability of our buildings throughout the project.”

Jordan also anticipates an efficiency grant, which should offset a portion of construction costs, from Entergy Mississippi. He expects a $20,715 rebate from the power company once the project reaches completion.

Even though the civic center isn’t using any of its budgeted operating capital on the lighting upgrade, the project’s total cost should be recouped in less than five years.

“We looked at areas in which we could invest the state bond money where the county would ultimately receive a good return on the investment,” Jordan said.

As part of the general overhaul, the civic center’s rodeo arena and show barn will also receive new coats of paint. Both structures are exposed to the elements, and neither has been repainted in nearly a quarter century.

“We want to continue to provide the same quality of enjoyment to the next generation of Lincoln County that we have for the past 25 years,” Jordan said. “And maintaining our infrastructure is part of that.”

The painting project won’t begin for a while, but bids are expected to go out soon. In conjunction with budgeted funds, the balance of the $100,000 state bond will pay for the paint refurbishment.

Jordan stressed that all work being done at the Lincoln Civic Center is covered by existing funds, and construction costs do not reflect an increase in area taxes.

“We want to do our part to help the supervisors and state officials fund work on roads and bridges,” he said. “So, we’re using our budget very wisely.”