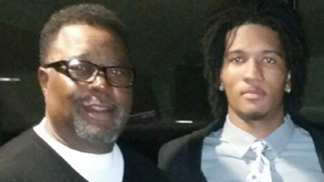 Photo submitted/Sidney Jones IV, a cornerback for the Philadelphia Eagles, visits with his grandfather, Brookhaven native Charles Watson. Jones’ aunt, Lillie Franklin (not pictured) will be watching the Super Bowl from her home on Center Street.

Aunt Lillie will be watching her Eagle from Brookhaven

There will be hollering in Brookhaven Sunday night no matter who wins Super Bowl LII.

That’s because Lillie Franklin’s nephew, Sidney Jones IV, will be part of the excitement in Minnesota for the matchup between the Philadelphia Eagles and New England Patriots. Jones is a cornerback for the Eagles.

Franklin will be watching the game from her house on Center Street, while her brother, Brookhaven native Charles Watson, will be in the stands at U.S. Bank Stadium in Minneapolis with his wife and their daughter, Jones’ mom. They arrived Friday night and are staying at the hotel with the team, so he expects to see his grandson today.

Watson brought Jones to visit Brookhaven when he was much younger. Football as a career was already on the 6-year-old’s mind.

“That was his dream,” said Watson, who lives in California.

Jones played at the University of Washington, foregoing his senior year to enter the NFL Draft. Coming out of college, he was projected to be a first-round pick. Then he tore his Achilles. Experts dropped him down to a second- and even third-round pick. The Eagles selected Jones in the second round and signed him to a four-year, $6 million contract. He was placed on the Reservation/Non-Football injury list to start the season due to the Achilles injury, but Dec. 30, he was activated to the 53-man roster for the regular season finale against the Dallas Cowboys.

His grandfather believes that if he’d been a first round pick, he might not have made it to the Super Bowl in his first year with the NFL.

Franklin said her nephew is a hard worker and has dedicated himself to football.

“This was a gift for Sidney and this is what he wanted to do,” she said. “He worked hard at it. He’s a quiet person. He doesn’t talk much. Sidney is just a good kid. He doesn’t get into any trouble or anything. He just concentrates on playing football.”

She hasn’t been a big football fanatic, but she likes to keep up with Jones’ career. She plans to watch him play Sunday.

“I’m proud of him and he should keep doing what he’s doing and keep God first and that will take him a long ways, on the field and off the field,” she said.

Watson will be cheering his grandson on, decked out in his Eagles green.

“If they win, we’re probably going to have a heck of a celebration,” he said. “But if they lose, we still can celebrate because who knew that they’d be here?”

The Co-Lin Board of Trustees on Thursday chose Jane Hulon to succeed the college’s current president, Ronnie Nettles, upon his... read more