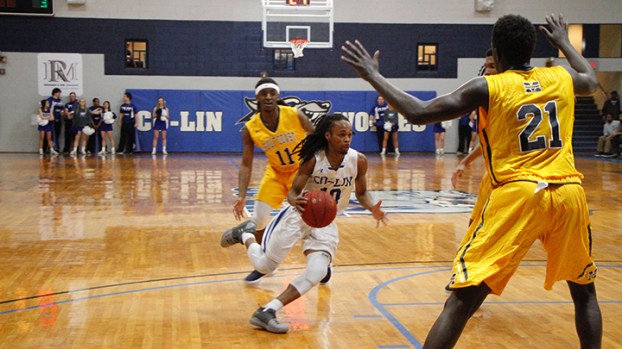 Photo by Co-Lin Athletics/Co-lin sophomore Jonathan Floyd weaves through traffic and into the key Monday in the Wolves’ 97-88 win over Mississippi Gulf Coast.

“We out rebounded them tonight and that was huge for us. We just really stepped up and made some great plays late,” said Co-Lin head coach Kenny Bizot. “Our team is just made up of competitors, we show up ready to practice and want to make each other better. That’s what makes this team different.”

The Wolves fell behind early as Co-Lin struggled with the three-point shot. The shooting woes allowed the Bulldogs to pull away to an eight point lead, 17-9 with 12:18 remaining in the opening half. The Wolves fought back over the next six minutes and tied the game for the first time at 26-26 with 6:29 left on the clock.

Floyd took over in the second half, as Co-Lin never relinquished their lead. The Wolves lived by the three-ball, rattling home 9-of-18 in the second half, four of which were made by Floyd. Tray Lawson came off the bench for the Wolves and performed well, as Youry White, Anthony Jones and Damarius Brooks continued to hit big shots and get defensive stops.

Gulf Coast cut the Wolves’ lead to just eight 12 different times in the final 15 minutes of the game, but Co-Lin always found a way to hold off the Bulldogs.

Floyd’s 35 points, a career high, led the Wolves. White posted yet another double-double, with 17 points and 10 rebounds, while Jones scored 14 and brought down nine rebounds. Brooks rounded out the Wolves’ double-figure scorers with 10 points. Brooks and Floyd led Co-Lin with six assists each.

The MACJC South Division win moves the Wolves to 16-2 on the year and 7-2 in the division. The Wolves are back in Wesson Thursday at 8 p.m. as Co-Lin hosts Hinds Community College.

The Copiah-Lincoln Community College Lady Wolves moved to 15-3 on the year and 6-3 in the MACJC South Division with... read more