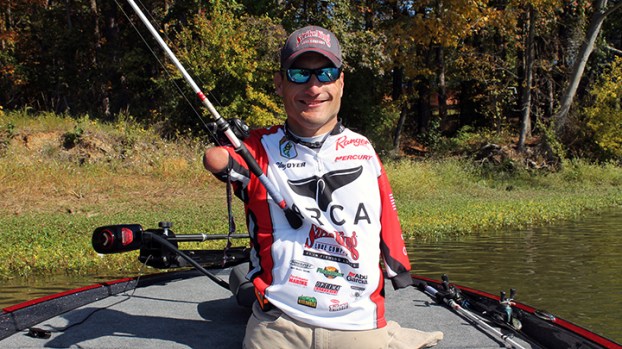 A pro bass fisherman with just a partial arm and no legs is headlining the annual Clear Branch Wildlife Supper to share how he’s angling for more than just fish.

Clay Dyer, a motivational speaker from Alabama, was born without any lower limbs, no arm on the left side and a partial arm on the right, but, despite that, he has been a successful tournament fisherman since he was 15 years old.

According to Dwyer’s Facebook page, he never uses special equipment while fishing. Instead, he tucks a standard rod under his jaw and whips it around with a quick left-to-right twist. He also ties knots with his tongue, reels in his catches unassisted and unhooks fish with his teeth.

“He could have gone in any direction with the cards he was dealt, but he chose to let his situation strengthen his faith and turn him to God,” Clear Branch Baptist Church student minister Crystal Stringer said.

The church is hosting its fourth annual wildlife supper as a ministry for the area. Admission is free, and everybody in the community is invited to attend. Supper — which includes brisket and several side dishes — will be served at 6 p.m., and the program should follow at 7 p.m. Door prizes will be awarded during the event.

Clear Branch began hosting the supper in 2014 as a way of broadening its local ministry outreach, and, since then, it has grown into a popular regional gathering.

“We just wanted to find a unique way to connect with the community,” pastor Wayne Moak said.

The Copiah-Lincoln Community College praise band will perform as part of the program, and a group of Clear Branch congregants will share their testimonies. Several hundred people attended last year’s gathering — which was held at Lincoln Civic Center — and the church expects another large turn out this year. The church is located at 2166 Clear Branch Lane.

“We really want this to be an encouraging event for everybody in the community,” Moak said.

The heads of the Wesson police and volunteer fire departments say January was a busy month as both agencies dealt... read more