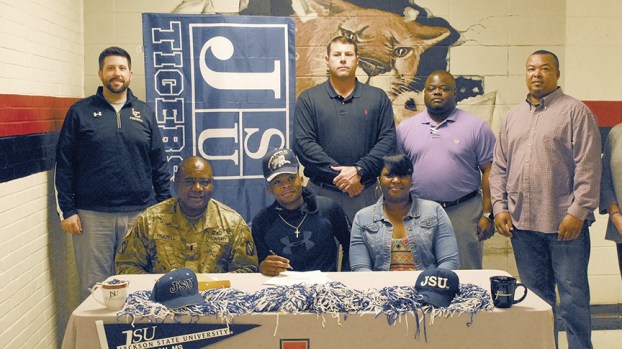 A leopard can’t change his spots. But a Cougar can grow stripes and become a Tiger.

Lawrence County senior Kendarius Feazell has done it. The do-it-all offensive football player on Wednesday signed a scholarship to Jackson State University as an athlete, and now he’s going to play football where he’s always wanted to play.

“I have liked Jackson State’s football program since I was a kid,” Feazell said. “I feel like that’s the best offer for me, the best choice. I like that they’re getting a new offensive coordinator, and I look forward to working with him. I think I will fit in well with the offense.”

Feazell is accustomed to fitting in with an offense. He has has made an impressive mark on Lawrence County. He comes from a family of sportsmen, and his dexterity is well regarded on both the gridiron and the basketball court.

He played all over the offense for Lawrence County last year. In the run game, he carried 72 times for 396 yards and eight touchdowns. He also caught 10 passes for 222 yards and six touchdowns, and when the team needed him under center, he threw 26 completions for 392 yards and three touchdowns.

“If I’d had more than one of Kendarius, we would have won a few more games last year,” he said, laughing.

Jackson State coach Tony Hughes said he and his staff were impressed with Feazell’s great speed and athletic ability.

“We signed him as an athletes, but we know he’s played a little bit everything — running back, quarterback, whatever-back,” Hughes said. “We’ll possibly start him on the offensive side of the ball somewhere, but we think he can also play some defensive back. He’s got a big frame, a lot of upside. We’ll get him in our program, feed him good, treat him good, work him and see how he grows.”

Hughes said the Tigers were proud to get another signee out of Lawrence County. Feazell makes two on the roster — JSU signed Quitten Brown in 2017.

Jackson State boasts an exciting football program, but Feazell also plans to take full advantage of the university’s academic offerings. He wants to study electrical engineering and pursue a career in technology.

Feazell will be the first person in his family to attend Jackson State, and his father, 1st Lt. Kenley Feazell, trusts his son will excel there.

“I’m very proud, and I have no doubt he’ll do very well at Jackson State,” he said.

Stacy Newsom, Feazell’s mother, was overwhelmed with emotion during his scholarship signing. She sat beside him, smiling and watching him officially commit himself to Jackson State.

Meanwhile, basketball season is still underway, and Feazell has much to accomplish before ending his high school athletic career. His eyes are firmly locked on the state championship, and he is eager to lead the cougars to victory. The Cougars are currently 17-10, and undefeated at 10-0 in Region 7-4A.

“We’re going to get that ring. We’re going all the way to state,” he said.

Athleticism comes naturally to Feazell, but he is keen to test the limits of his potential.

He takes a pragmatic view of what lies in store for him in Jackson. For the past four years, he has been the darling of Lawrence County, but he knows that will change in the fall. Feazell aims to earn the respect of his new teammates through hard work and humility.

“It’s going to be different, because, in high school, everything was kind of on me. But, in college, I’ve got to put myself aside and focus on the team,” he said.

Wide receivers get in the spotlight. Defensive backs do all the talking. Quarterbacks get locked in a foam case at... read more