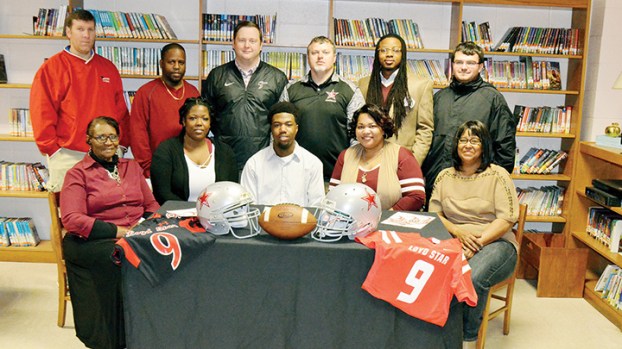 Wide receivers get in the spotlight. Defensive backs do all the talking. Quarterbacks get locked in a foam case at night, protected.

Loyd Star senior Patrick Price goes to war at the running back position.

“It takes heart to run the football,” he said. “Everybody is trying to jump on you. You gotta have the heart to get up and go again.”

Price and his heart are heading to Clarksdale this fall after signing a scholarship offer to Coahoma Community College Wednesday during national signing day.

“They’re rebuilding right now and I want to be a part of that. There are big-time recruits coming to Coahmoa from everywhere,” Price said. “I’m going to bring my work ethic to the team. They’ve gotta help get me a little bigger, but I’ve got the heart to run the football, and that’s what they like to do.”

Price had heart in 2017. He led the Hornets in rushing with 943 yards on 125 carries, good for 7.5 yards per carry and almost 100 yards per game. He was on pace to smash the 1,000-yard mark before a broken collarbone ended his season a week early in a game against West Lincoln on Oct. 26.

He scored 12 touchdowns on the year and contributed 22 tackles, three pass breakups and two fumble recoveries on defense.

Price may have been overlooked by other colleges because he played football for Loyd Star, a small 2A school, said Coahoma offensive coordinator Moses Harper. The Coahoma staff looked deeper.

“You have to look at what he does to his opponents, and Patrick dominates his opponents,” Harper said. “We like his stability, his height, his frame. He can put some weight on, and we’re looking at him to do multiple things for us. We think he can play running back and defensive back with his skill set. We’re excited about him.”

Loyd Star football coach Brian Ford said Price is well respected around Loyd Star because he’s humble and works hard. Those traits will take him far at Coahoma, he said.

“They’re getting a guy of high character with a great deal of potential as an athlete,” Ford said. “I don’t know that we can replace a guy like Pat here at Loyd Star, and what he meant to our team. You just have to take the next guy, mold him and get him ready and turn him loose, and see if he can make the most of his opportunities like Patrick did.”

Price’s mother, Katrina Terrell, said her son chose Coahoma because of the support offered him there.

“He said he wanted to go somewhere he was wanted, where he would be part of a family,” she said. “I’m proud of the man he’s becoming. He was blessed by God with talent, and I’m glad he’s using it.”

Price’s father, Patrick Price, Sr., said his son was ready to play at the next level.

“I couldn’t be more proud of him,” he said. “It’s been a ride, and it’s been wonderful, every game.”

Chase Owen used to be tiny. The West Lincoln senior was born too soon, at 30 weeks, and spent his... read more