Brookhaven wants walkway that would tie downtown to train station 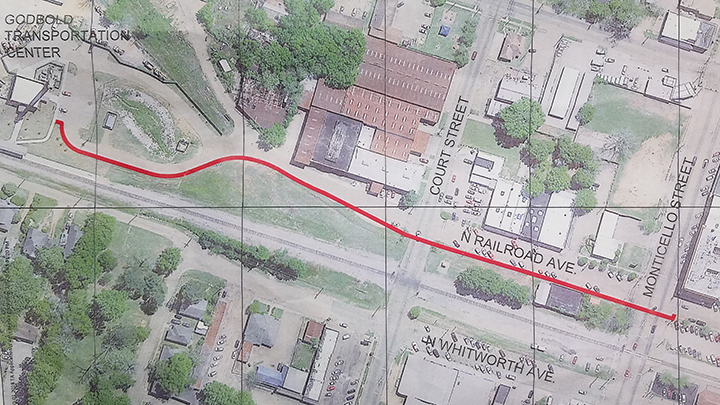 This map shows the proposed route of a walkway to connect the train station with downtown Brookhaven.

If all goes as planned, construction could begin next year on a walkway that would connect the Godbold Transportation Center to the downtown area of Brookhaven.

Alderman voted unanimously to apply for the MDOT grant at its board meeting Tuesday.

TAP grants are not available every year, so city engineer Mike McKenzie, a principal at WGK Engineers & Surveyor, suggested Brookhaven should apply.

“This year they have a little money so they’re accepting applications,” he said.

McKenzie presented Mayor Joe Cox and the Board of Aldermen with a map of the proposed pedestrian walkway, which would stretch from the transportation center to the parking area at the corner of East Monticello Street and North Railroad Avenue. The walkway would include painted crosswalks and handicapped ramps across East Court and East Monticello streets. Decorative lighting would be added at 100-foot intervals to match the lighting of the downtown area.

“We’d do some landscaping lighting in a few strategic places along the way,” he said.

The TAP was established under the Moving Ahead for Progress in the 21st Century of 2012 and replaces the Transportation Enhancement Program, Safe Routes to School Program, as well as the Recreational Trails Program. There are many federal and state regulations and project implementation procedures that will be required if a project is approved, according to MDOT.

City officials believe Brookhaven could be approved for the grant because the project would tie the multi-modal transportation center to the downtown stores, restaurants and lodging.

“We’re trying to tie the multi-modal to town,” Cox said. “It’s kind of what the thought is there, and that’s how the TAP gets included in it.”

After the vote was taken, Ward 1 Alderman Dorsey Cameron asked if McKenzie had considered taking the walkway on down East Monticello Street to First Street to connect to the sidewalk there.

Ward 2 Alderman Shannon Moore wanted to know if the grant could be used to improve or create sidewalks in other areas of Brookhaven. McKenzie said TAP grants aren’t designed to be used for basic sidewalk projects.

“It’s not intended just to go out and just replace sidewalks randomly, for lack of a better word, willy-nilly, around town,” he said. “It needs to be a focused purpose. Like the mayor said, the sole purpose for this was to tie the transportation center to town so that anybody coming in on the train could have a direct path, connect right to town. It’s got to be something definitive with a beginning and an end.”

Ward 5 Alderman Fletcher Grice said he wants to see the area along the proposed walkway cleaned up. He mentioned the old motorcycle shop building the city purchased in June for $87,902 that is located on North Railroad Avenue on the north side of East Monticello Street. He also said he’d like to see clean-up initiated at the former outreach building, where people still leave donations outside long after Brookhaven Outreach Ministries moved to another location nearby.

“Just a thought, going forward. We’ve got time. We’ve got a year,” he said. “I’d like to see this board working on taking care of that.”

The Godbold Transportation Center opened Dec. 29, 2011 and is served by Amtrak’s City of New Orleans passenger train. The facility is located in the town’s old power plant, originally constructed in 1890.

After Cox was re-elected in June, he said merchants and restaurateurs have told him they missed the days of the train station being in the heart of downtown because whenever there was a short layover, passengers would come in and shop and eat.