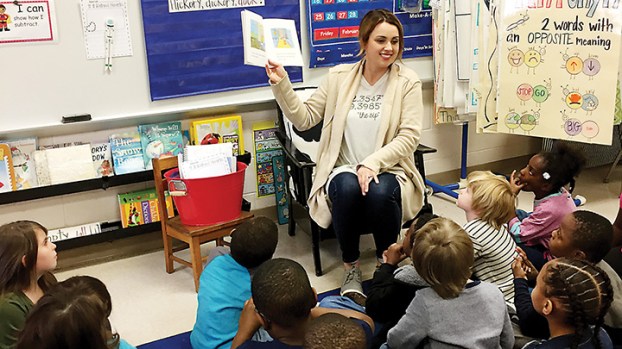 Photo submitted/Jessie Case was named Teacher of the Year.

Jessie Case’s mother told her, “Get an education and do what you love.”

It turns out that the two go hand in hand for this 33-year-old kindergarten teacher.

Case, 33, of Loyd Star, is the Brookhaven School District’s Teacher of the Year. She had already won for her school, Mamie Martin Elementary, when she was chosen to represent the district at the state level.

Deputy Superintendent Rod Henderson said each school’s winner was interviewed by a panel of educators to pick the district winner.

“She came out on top hands down on that,” he said.

Henderson said Case has a good performance record for her classroom, but it’s her concern for her students that makes her stand out.

“She’s a very, very caring teacher, and it’s bigger than that,” he said. “She’s got great numbers and test scores, but she truly cares about her students. She totally gets it and understands what it should be like to be a teacher.”

Case is married to Rhett Case, a Brookhaven firefighter, and they have two children — Scarlett is 7 and Slate is 3. Both are students at Mamie Martin.

She’s taught in the Brookhaven School District for nine years and all nine have been at Mamie Martin in kindergarten.

That’s a long time to be in one school. Case grew up in a military family and traveled the world. She attended 12 other schools before she moved to her mother’s hometown of Brookhaven her junior year. She graduated with honors and headed to Copiah-Lincoln Community College and then the University of Southern Mississippi.

Her family always encouraged her dream of becoming a teacher.

“Teaching has been a part of my heart since I was 3 years old,” she said. “When I was a child I would cry when the children in our neighborhood did not want to play school. I could not understand why the other children did not want me to teach them even after hours of being at school. After a couple times of wiping away tears my parents surprised me and turned our storage shed out back into my own little school house. My little brother and parents had to sit through many ‘classes’ after that.”

As a student teacher at Mamie Martin, she discovered a great passion for teaching kindergartners so when a position opened, she jumped at the chance to join the staff.

“I love what I do,” she said. “I love my students. I am driven and I love the challenge of growing children. I want all of my students to know they can be successful.”

Case is inspired by a quote from Aristotle: “Educating the mind without educating the heart is no education at all.”

“I believe that my role as a kindergarten teacher is to provide a loving and nurturing environment for my students and their families,” she said. “I want my children to know I believe in them and their ability to be successful.”

Case understands that children come from diverse backgrounds and learn at different rates so she strives to create an atmosphere that allows children to be successful learners.

“I have learned over the years how important it is to build relationships with my students and learn what interest and motivates them,” she said. “Compassion, support, encouragement, lesson development, pacing guides and common assessments have been my greatest contributions to my peers and students.”

Case is in the running for Mississippi Teacher of the Year.

Other winners in the district were:

Here’s a little known fact about Brookhaven’s Layne Jordan Xifos. She appeared in a Kenny Chesney video with her husband,... read more