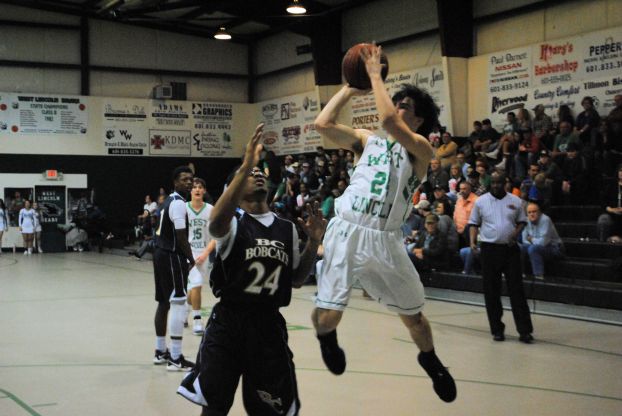 The Bears’ offense struck hard and fast, racking up 38 points by halftime. West Lincoln stayed in scoring position throughout the second half, to keep Bogue Chitto at arm’s length throughout the game.

“It was good for the seniors to get the win in the last regular season home game,” West Lincoln coach Brooks Smith said. “I thought Adam Martinez played well tonight. It was good to get two wins before we go into the region tournament.”

The first period saw lead changes as both teams tried to establish their offensive game. The Bears offense heated up in the closing moments of the first to lead 23-13.

The Bobcats started to fight back against West Lincoln’s scorers in the second quarter, but the Bears heated back up quickly and extended their lead to 38-23 at halftime.

Bogue Chitto continued to fight hard in the third period, holding West Lincoln to just 10 points. But the Bears fought back on defense and limited the Bobcats to nine, leading 48-32 to start the final period.

The Cats tried hard to stay in the game, but West Lincoln’s offense heated up again. Late in the fourth, Bogue Chitto found themselves in foul trouble and the Bears scorched through the final minutes of the game, prevailing 59-42.

The win puts West Lincoln at 5-3 in Region 7-2A, giving them the No. 3 spot in this week’s region tournament.

The loss moves the Cats to 3-5 in the region. They play tonight in the lower-seeded game to open tournament play.

The Brookhaven Academy Cougars and Lady Cougars waltzed their way into the District 3-AA tournament finals on Saturday with expectations... read more