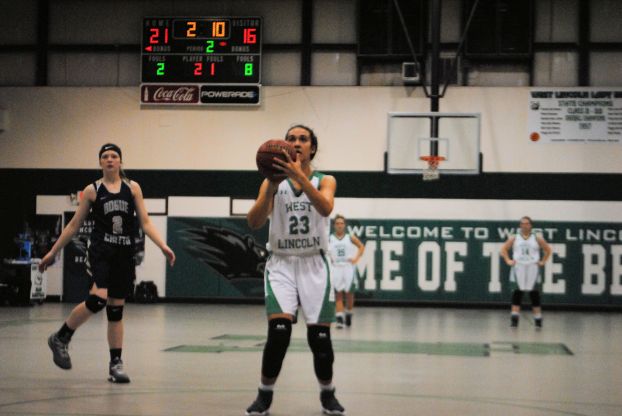 West Lincoln’s Lady Bears locked up the No. 1 spot in Region 7-2A Friday night, surging past the Lady Bobcats of Bogue Chitto on senior night by a score of 53-42.

With the flu sweeping through West Lincoln, the Lady Bears seemed to have their work cut out for them, as missing players caused them to get off to a slow start. But the West Lincoln girls showed not even the flu would be enough to hold them off the top of the region, taking control of the game in the second half.

“I was proud of the girls getting the win and thought Kateyln Dickerson really stepped up,” Lady Bears coach Brooks Smith said. “It was good to get the win, with some of the girls being out with the flu. I told them that this weekend we need to get healthy so we’re ready come Thursday in the tournament.”

Even with the Lady Bobcats scoring first, the first period saw ties and lead changes as the quarter went along. The Lady Bears edged out Bogue Chitto to end the first, holding onto a slim 9-8 lead.

The second period was back and forth until late, when the Lady Bears began to separate themselves from the Lady Cats, taking a 28-18 lead into half time.

The Lady Cats started the second half by trying to shorten the Lady Bears lead. But West Lincoln’s offense heated up late in the third, steering their way to a 42-33 lead heading into the final frame.

Halfway through the fourth, the Lady Cats made several comeback attempts, but the the Bogue Chitto girls couldn’t get there in time.