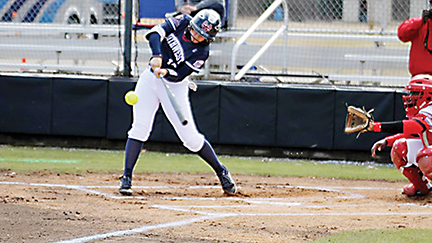 Photo by Southwest Sports Information/Freshman infielder Terrah Nelson got a run-scoring double to help take the Lady Bears to a 4-0 win over the Mississippi Delta Lady Trojans Friday.

The Lady Bears exploded for 38 hits and 30 runs Friday afternoon in Moorhead, as they moved to 4-0 on the young season with a 16-2 and 14-2 doubleheader sweep of the Mississippi Delta Lady Trojans.

An RBI double from Tia Bussey, her second hit of the game, along with another RBI double by Nelson and Ashley Elsensohn’s RBI triple aided the Lady Bears’ eight-run third inning that left them with a 16-0 advantage. The Lady Trojans then picked up their only hits and runs of the game in the bottom of the inning.

Kassie Shipley went two innings in the circle, striking out two batters and surrendering no hits to pick up the win. Kayla McNabb had five hits in the game, including a double, while driving in three runs and scoring three. Elsensohn picked up four hits and scored four runs. Miranda Magee had a pair of hits while Madison Bates had a double.

It was more of the same for the Lady Bears in the finale with all nine batters getting at least two hits. Elsensohn and Melanie Crum both had an RBI single in the top of the second to put the Lady Bears on top 2-0. Elsensohn would later add another hit and RBI while Crum would also record a second hit.

Nelson’s third RBI double of the day would increase the Lady Bears’ lead to 4-0 in their half of the third — she also had a single in the game. In the top of the fifth, Magee drove in a run with a triple, her second hit of the game, to make the score 5-0.

A solo homer from Bates and her RBI double were the big blows in the top of the fifth, as the Lady Bears scored nine times to move ahead 14-0. In the bottom of the fifth, the Lady Trojans (0-2) again avoided the shutout, using a single, walk and two hit batters to score their only runs of the game.

Mikaela Smith went four innings in the circle, giving up one hit while striking out three and walking one to pick up the win. Bussey had three hits and a pair of RBI’s in the game while Jordan McNabb and Kayla McNabb both hit safely twice.

The Lady Bears took a few days off before returning home today to host the Hinds Lady Eagles.