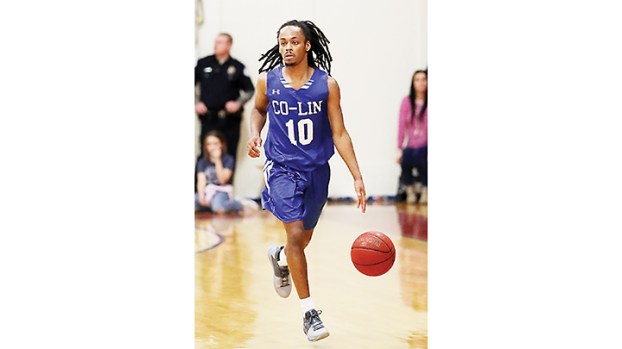 “We couldn’t be more proud of guys right now. We always talk about being together and tonight we were. It was great to see,” said Co-Lin assistant coach Jake Reed. “Lawson was big for us tonight, he made some plays for us when we needed him. We just had more energy and heart in the second half.”

The Wolves came out with a vengeance in the second half and began to chip away at the Warriors’ lead. An 18-4 Co-Lin run that lasted for six minutes tied the game at 53-53, the first tie since the opening minutes of play. Several Wolves were responsible for the burst of offense as Co-Lin scored from all parts of the floor and dominated the defensive end of the court.

East Central pulled away to a seven point, 66-59 lead with 5:38 remaining, but a 9-0 run from Jonathan Floyd, Tray Lawson and Darrian Wilson gave Co-Lin a two-point, 68-66 advantage. The lead was the Wolves’ first since the first five minutes of play.

East Central and Co-Lin traded baskets over the final three minutes and ended regulation tied at 70 each. The Warriors had an opportunity for a game winner at the buzzer, but Floyd blocked East Central’s shot.

The turning point in overtime was a four-point play from Co-Lin’s Floyd. The sophomore shot a three from the top of the key, drew the foul and drained the high-arcing shot. With the free throw, the Wolves led 77-72 with just 2:30 remaining in overtime. East Central took advantage of several trips to foul line in the extra frame and tied the game for the seventh time, 77-77, with just 1:29 remaining.

Youry White hit a go-ahead jumper with 1:08 remaining to give the Wolves the lead, and Co-Lin’s Lawson got a key steal on East Central’s final possession to lock in the victory.

Floyd led the Wolves with 20 points. The Harrison Central graduate also brought down six rebounds and had five assists. White, Lawson and Anthony Jones all scored 13 for the Wolves. Wilson led the Wolves on the boards with eight rebounds, while Damarius Brooks led Co-Lin with six assists. Co-Lin racked up 15 steals on the night, led by Floyd with five, while Lawson had four and Wilson had three.

The win moves Co-Lin to 17-3 on the year and 8-3 in the MACJC South Division play. The Wolves are currently in first place in the division and take on the Southwest Bears Thursday in Mullen Gymnasium. Tipoff is set for 8 p.m.

Co-Lin’s Floyd is named MACJC Player of the Week

Jonathan Floyd, a sophomore from Gulfport, was tabbed MACJC Player of the Week after two stellar performances against Mississippi Gulf... read more