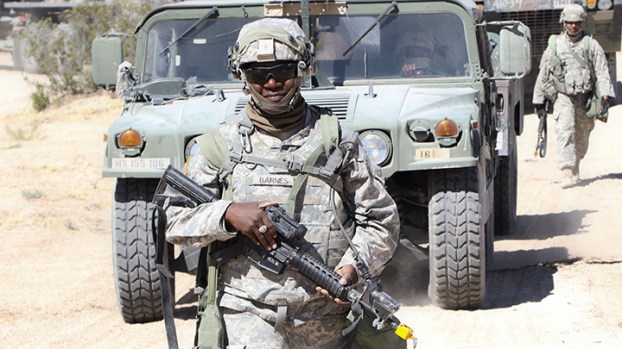 The 155th armor brigade, a group of local National Guard members, will soon join the War on Terror as part of Operation Spartan Shield in Kuwait.

As a means of paying homage to Mississippi’s travel-bound soldiers, the Town of Monticello is planning a special send-off March 7. The event,  “March Through Monticello,” will include a parade, music and a program.

Mayor Martha Watts and the Board of Aldermen organized the gathering after Sgt. 1st Class Matt Holmes asked if they would be willing to recognize the 155th’s deployment.

“As soon as he asked, we said absolutely, yes,” Watts said.

Georgia-Pacific was also eager to honor the departing brigade. The plant’s catfish frying team plans to feed the troops and their families at noon as part of the official send-off.

A march down Broad Street will follow the luncheon at 2 p.m., and Watts encourages everyone to come out and show support.

The Lawrence County High School band has been commissioned to play for the troops, and local officials will pay tribute to attending service members once the parade concludes at the Lawrence County Courthouse.

Lt. Col. William Walley, commander of the 106th Brigade Support Battalion, looks forward to the festivity and hopes to see a large turnout.

“It’s absolutely wonderful that the town has planned this send-off,” he said.

The upcoming deployment will be Walley’s third to the Middle East, but several members of his battalion have never served abroad. He believes the Monticello celebration will make their transition from Mississippi to Kuwait much easier.

“It really makes a soldier feel better about leaving when they know their family is being taken care of at home,” he said.

In an effort to ease the troops’ minds, Watts plans to mobilize Monticello’s resources and rally around the guard members’ families for the duration of their tour.

“The aldermen and I plan to be a source of support for the loved ones of the soldiers heading overseas,” the mayor said.

The Bogue Chitto Attendance Center is teaching more than just math, science and reading. Since the beginning of the current... read more