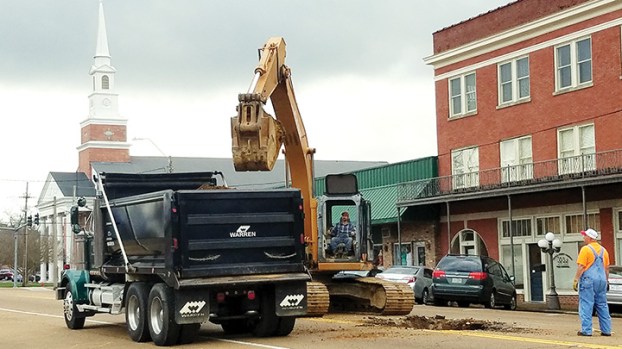 Photo by Donna Campbell/Workers from Greenbriar Digging Services dig a hole on East Monticello Street Thursday to put in a manhole as well as water and sewer taps for an upcoming private construction project on the lot between Trustmark Bank and Foster’s Chevron. The road project was expected to be completed Thursday, but may continue this morning, blocking traffic on this section of street for a while longer.

Workers looked like they were digging a hole to China.

The big yellow excavator’s bucket clawed at the asphalt and dirt, creating a cavern in the middle of the two lanes of East Monticello Street Thursday morning.

The road was blocked to traffic from First Street to Whitworth Avenue early in the day, but that length was lessened after lunch to just the area between First Street and Railroad Avenue, said Kris Xifos, water and sewer department supervisor for the City of Brookhaven.

The hole was dug to install a manhole and to put in water and sewer taps for a new business.

Xifos expected work to be completed Thursday night, but said the project might need to continue this morning as well. If so, the road would be blocked again.

He said the owner of the fenced lot plans to build a two-storey business center on the property that would include spaces for shops on the bottom floor and apartments on the second floor.

“We’re going to give him water and sewer to that area there,” he said.

He said Greenbriar Digging Service did the roadwork, following Mississippi Department of Transportation guidelines which required the road to be closed.

Xifos said the construction in the lot will mimic the architecture of many of the other downtown buildings.

“It will be another beautiful addition to that area of downtown instead of an empty lot,” he said.

Lawrence County High School was evacuated and other schools in the district were placed on lockdown Thursday afternoon after a... read more