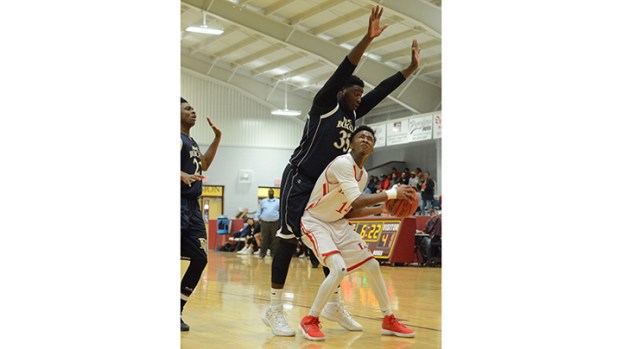 Bogue Chitto junior Darius Porter remembers his Bobcats getting squashed once by Loyd Star in an important matchup — in a junior high game, four seasons ago, when he was in the eighth grade. When Bogue Chitto put Loyd Star out of the Region 7-2A tournament 51-40 Thursday night, he celebrated for the past as well as the present.

“First time we played them for this kind of moment, they took it from us, and we’ve been waiting to get it back,” Porter said.

Porter’s painful memories of defeat and anguish — as a 13-year-old — can finally be laid to rest.

His Bobcats managed to play sneaky basketball and get the edge on the Hornets in a closely fought contest Thursday night. In a game that saw two powerful offenses race headlong to the basket for most of the duration, it was Bogue Chitto that was able to slow the game down and find back-door ninjas creeping up under the basket while the Hornets’ attention was focused elsewhere.

Loyd Star worked some magic in the lane, too, but late in the game was forced to resort to jump shots that often rattled out. Those few scoreless possessions — most in the third quarter — were the difference.

The Bobcats had the advantage after the first quarter, up 13-7, but the Hornets played a 13-11 second period to trail just 24-20 at halftime. Bogue Chitto won the third quarter 13-8 and enjoyed a 37-28 lead at the start of the final chapter, and squeezed just enough out of a 14-12 fourth to win the game.

“Our plan was to lock No. 23 down and not let him get much of nothing,” Porter said.

No. 23 — Loyd Star junior Dane Smith — got a little of something, scoring 14 points. But he fired up 10 three-pointers, hitting only two for 20 percent from behind the arc, an uncharacteristic stat for the Hornets’ scoring leader that shows how much effort the Bobcats put into keeping him away from the basket.

“We stick to our man, and we didn’t allow open shots,” said Bogue Chitto junior Cameron Gladdens, who connected on a pair of nice three-pointers in the first half. “When we see somebody open, we hustle to get to them.”

Bogue Chitto coach Mark Pitts said Loyd Star is not an easy team to play. The teams split in the regular season, and the Hornets were on a five-game winning streak since losing to the Bobcats on Jan. 26. They put down some powerful teams in that span.

“We knew their capability, but our goal was to play Bogue Chitto basketball, to play as a team, to be mentally tough,” Pitts said. “We are finding ways to close out games.”

Loyd Star senior Patrick Price said his team just could not get any momentum going against Bogue Chitto.

“We couldn’t make shots, couldn’t rebound. They out-hustled us on every possession,” he said. “We gotta get back on fundamentals.”

Loyd Star coach Gene Britt had a simple explanation for the loss.

“You don’t play good, you get beat. That’s what happened to us tonight,” he said. “Our mind wasn’t on basketball. We just went through the motions, and Bogue Chitto did everything, shot everything. They came to play.”

With the win, Bogue Chitto advances to the Region 7-2A championship to face Amite County Friday night. They will begin next week’s postseason with a home matchup.

Loyd Star, after fighting their way into the region tournament’s No. 1 seed at the end of the regular season, will start their playoff run on the road against some of the more powerful teams in 2A.

Smith said his team has to refocus before next week’s games and remember what it’s capable of.

“Every game is new. You can’t look behind you,” he said. “Even if you face the No. 1 team, that doesn’t mean they’re better than you.”

Amite County’s Lady Trojans put the hurt on the Lady Hornets — literally. In a physical contest that seemed to... read more