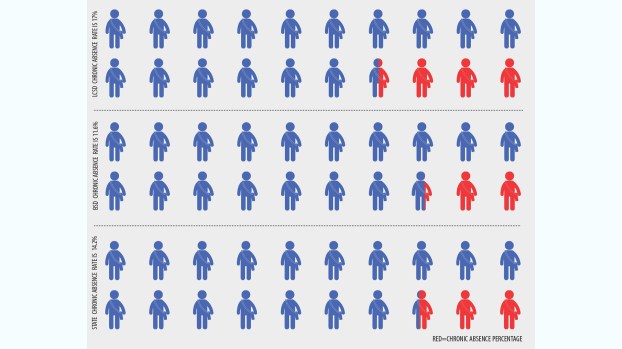 The Brookhaven School District had a lower rate of absenteeism for the 2016-17 school year than the state average, but the rate for Lincoln County was slightly higher.

Any student missing more than 17 days of a 180-day school year is classified as chronically absent, and the Mississippi Department of Education’s Chronic Absenteeism Data Report for 2018 found that missing 10 percent or more of school — regardless of whether the absences were excused, unexcused or the result of a suspension — caused students to have:

• Lower levels of numeracy and literacy by third grade.

• Higher levels of class failure and suspension in middle school.

Moreover, the report indicated that missing two or more days of school per month could actually stunt a student’s academic progress by two full years. Statistics also suggest that absenteeism is partly responsible for a recent widening of the achievement gap among students from low-income families and other minority groups.

Mississippi public schools are currently financed based on the Average Daily Attendance of their student bodies, and absenteeism, chronic or otherwise, has a deleterious effect on funding. Hence, academic administrators place an enormous amount of importance on student attendance.

“Absences result in a reduction in the monies we receive to operate our schools,” Myers said.

Of all the county schools, Enterprise experienced the most absenteeism with a rate of 20.32 percent, and West Lincoln recorded the lowest rate at 12 percent. Meanwhile, Loyd Star and Bogue Chitto logged rates of 18.46 percent and 18.31 percent, respectively.

“The daily attendance goal for individual schools is 96 percent. Frequently, this is achieved, but during the current school session, we are averaging between 91-94 percent throughout the district. We have been adversely affected by almost-epidemic occurrences of flu and strep,” Myers said.

Statewide, high school seniors have the highest rate of absenteeism of any grade at 30.82 percent, and third graders have the lowest at 7.91 percent. Brookhaven schools seem to follow that grade-based trend.

At 24.17 percent, Brookhaven High had the highest rate of absenteeism of any school in the city.

Truancy is one of the leading causes of chronic absenteeism on the national, state and local levels. It is defined as the absence of a compulsory school age student for five or more days without a valid excuse.

To help cut down on truancy, both the Lincoln County and Brookhaven school districts have automated phone systems that notify parents when a child is absent.

Myers said his district also employs a truancy officer whose job is to confront the parents of children who miss too much school. In Mississippi, parents and guardians of chronically absent children can face serious legal repercussions, including mandatory court appearances.

“One of the first steps school leaders can take to address this issue is to examine their data to identify the students who are struggling the most with chronic absenteeism,” said state superintendent Carey Wright. “Schools, parents and communities need to work together to make sure all children are attending school regularly.”

To help cut down on statewide absenteeism and bolster student achievement, MDE asks that parents:

• Ensure students arrive on time to school, well equipped and ready to learn.

• Take an active interest in the education of their child by talking to them about school and by attending school events.

• Call the school before 9 a.m. on each day of student absence.

• Be alert to any signs that might indicate bullying or other issues that could affect school attendance.

• Inform the school immediately if there are any matters arise that may affect the attendance of their son/daughter.

More specifically, the Brookhaven School District encourages parents to make sure students get a good night’s sleep and arrive to school on time. The district also discourages unnecessary checkouts.

Hogs won’t be the only ones going wild at this year’s barbecue festival. The cows are getting in on the... read more