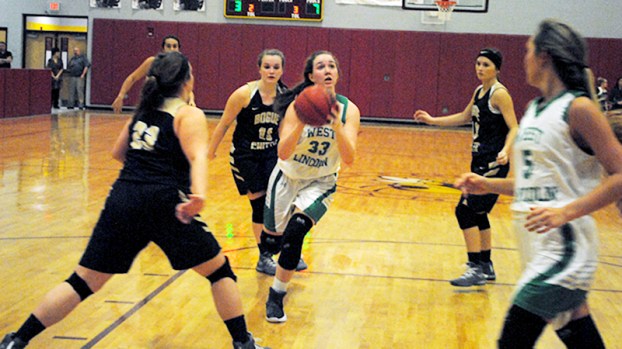 Lady Bears on to title game

West Lincoln’s Lady Bears advanced to the Region 7-2A championship with a 67-45 win over Bogue Chitto Thursday afternoon.

The Lady Bears controlled most of the game, as their offense scored and fast and often. The Lady Bobcats found themselves in a similar situation, as they had to play from behind for most of the game. Creating turnovers, the Bogue Chitto girls started the comeback rally but fell short in the end.

“I’m proud of the girls and the win,” said Lady Bears coach Brooks Smith. “We shot the ball really well.”

The Lady Bears hit a seven-point streak before the Lady Cats managed to score their first basket of the game. The she-bears offense fired on all cylinders as they led 23-8 heading into the second period.

West Lincoln started sloppy in the second quarter, allowing the Lady Bobcats to begin working on the deficit, but once the Lady Bears got themselves back together they began to pull away to lead 35-17 at halftime.

“I told them it was great to get the win, but I didn’t think we would be anything less than this,” Smith said. “We’ve got to be ready to play against Amite County. We can’t just show up, walk out there and expect to win.

Causing turnovers, the Lady Bobcats started their comeback attempt in a big third quarter. The Bogue Chitto girls doubled their own score, but West Lincoln still grabbed 11 points to lead 46-35 heading into the fourth quarter.

The Lady Bobcats managed 10 more points in the final frame, but West Lincoln’s offense went to work and threw down 21 points to take the game.

The Amite County Trojans advanced to the Region 7-2A championship Friday night after squeezing out a 52-50 victory over West... read more