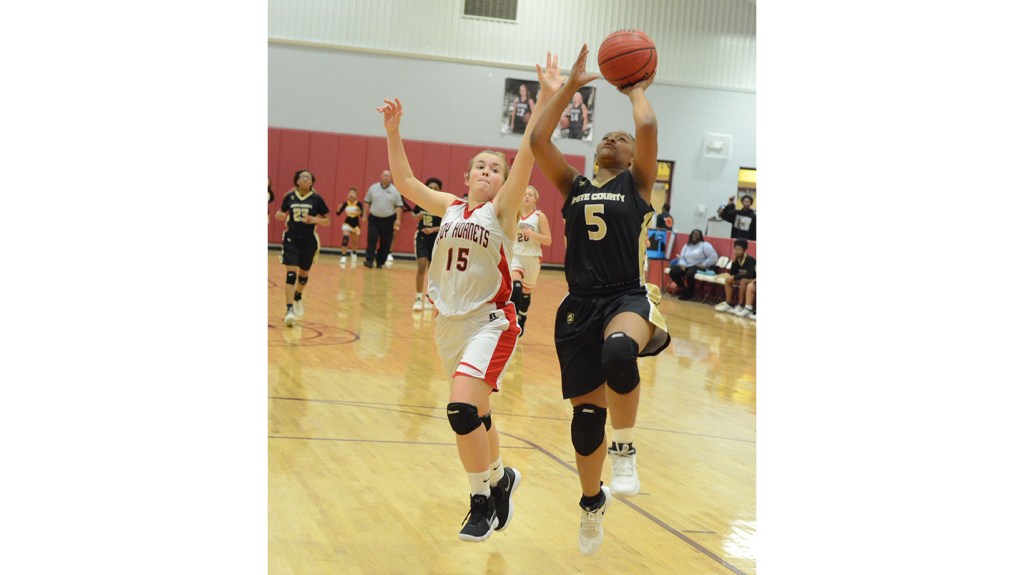 In a physical contest that seemed to throw the Loyd Star girls off their game, the Lady Trojans shoved and elbowed their way to a 48-35 victory and eliminated Loyd Star from the Region 7-2A tournament. The Lady Hornets mounted a sharp comeback attempt late in the fourth quarter, but could not overcome the deficit left by being dominated through the middle of the game.

“We got beat down. It was a very physical game, a lot of fouling,” said Loyd Star senior Marley Poole. “We kind of like to slow it down and we weren’t able to do it.”

The game almost became a pit fight. The Lady Hornets were called for 20 personal fouls, and Poole caught her fifth and last foul near the final buzzer. The Lady Trojans picked up 18 personals.

And yet, despite all the fouling, it was the fouls not called that excited the crowd and players. Eight of the Lady Hornets’ 20 fouls came in garbage time — they earned only a dozen before intentionally fouling in the final minutes.

Cain appeared to push herself up off her forearm — which was buried in Wallace’s face — then spring to her feet, spike the basketball and pound her chest. Spiking the ball is normally an automatic technical foul, but there was no whistle. The Lady Trojans were awarded possession.

The Loyd Star crowd was less than pleased with that and several other calls. But the Lady Hornets did not lose the game on the whistle.

They lost it in the lane.

The Amite County girls dominated the boards and charged easily into the paint for layups while the Lady Hornets seemed noncommittal to defensive play. The Lady Trojans went on a blistering 22-6 run that lasted from two minutes remaining in the first half to the beginning of the fourth quarter.

The Lady Hornets were in the hole 18 points when the final period began, then outscored the Lady Trojans 15-8 in an effort that came up short.

“If we would have come out like we did in the fourth quarter the whole game, there wouldn’t have been a chance of them winning,” said Lady Hornets junior Sarah Britt.

Britt was able to break inside for eight points in the fourth quarter, but the Lady Trojans blanketed her with coverage throughout the game and held her to just five points before the comeback attempt. Loyd Star’s shooters did not throw in Britt’s missing points, as the rest of the team scored only five, seven and three points in the first three quarters, respectively.

“We knew they would dish it in to No. 12 (Britt), and we knew she’s good at free throws, so we worked together to block her out,” said Amite County senior Ariesha Chandler. “We just moved around, played hard defense and went for every loose ball.”

While Loyd Star was suffocating, the Lady Trojans were scoring left and right. Senior Ambria Handy led Amite County with 17 points, while Cain backed her up with a dozen and Chandler threw in 10. Junior Raven White scored six points, and junior Brandi Thomas finished up with three.

“We came to play tonight,” said Lady Trojans coach Takeya Felder. “It starts on defense — we got Loyd Star frustrated, and that got us a lot of touches. We played together as a team.”

Britt still led the Lady Hornets with 13 points, and junior Christie Patterson fired up 10, including a pair of three-pointers. Poole and Wallace contributed five each, and junior Meagan Poole scored two.

The win sends the Lady Trojans on to the Region 7-2A championship to face West Lincoln’s Lady Bears. The girls in green bested Amite County in both regular season matchups.

The loss forces the Lady Hornets out of the tournament and on the road for the postseason beginning next week.

“Everything tonight has to change,” Poole said. “If we can’t go in to Sarah, we have to be able to make shots.”