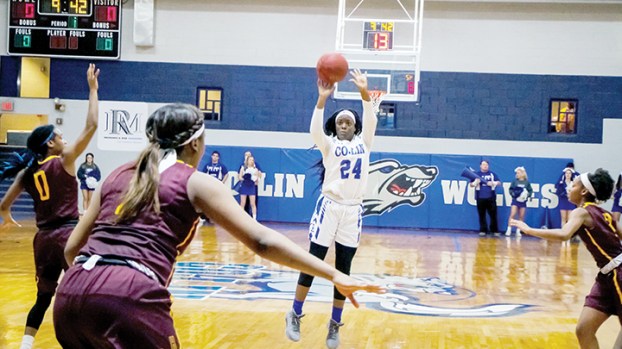 Both the Lady Wolves and Lady Bears struggled on the offensive end of the floor early in Thursday’s contest, as Co-Lin led 12-10 after one quarter of play.

The third quarter was much of the same for Co-Lin, as the Lady Wolves only scored 11 points. The Lady Bears pulled away to a 10-point, 42-32, lead going into the final quarter of play.

The Lady Bears stretched their lead to 13, 47-34, early in the quarter, but Co-Lin refused to quit. A 9-2 Co-Lin run led by Alexus Holt and Karry Callahan cut into Southwest’s lead. The Lady Wolves followed that with another offensive explosion led by Kyeonia Harris.

The 12-2 run over the final five minutes of play was the result of solid free throw shooting, and several defensive stops. The impressive push gave the Lady Wolves a four-point, 55-51 lead with just four seconds left on the clock, and sealed the win for Co-Lin.

The win moves the Lady Wolves to 18-3 on the season and to second place in the south division (9-3).