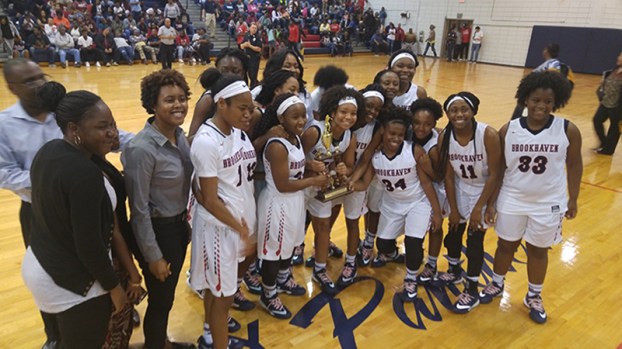 Brookhaven's Lady Panthers celebrate the capture of the Region 6-5A championship trophy after beating Wingfield 61-37 in the region tournament final.

They carried the trophy, golden and slender, into the locker room together and closed the door. As one, they screamed the high, sharp scream of victory.

It was an motional post game for Brookhaven’s Lady Panthers, who cruised to an easy 61-37 win over Wingfield to bring the Region 6-5A championship home to Ole Brook, the first time it’s resided there in 11 seasons.

“It feels satisfying,” said Lady Panthers senior Taylor Carter. “I remember in the ninth grade, being on the bottom of the district. We’ve had tremendous growth together as a team, playing for Coach (Preston) Wilson, who’s taught us so much. We’ve worked hard to get here.”

The Lady Panthers handled business against overmatched Wingfield looking very much like the team that won 22 games in the regular season. An analysis of rebounds and assists and steals is pointless — the Brookhaven girls led 29-13 at half and slammed the door on any Lady Falcons second-half adjustments by dominating the third quarter 22-6.

Even in the region championship game, Ole Brook reserve players got significant playing time in the fourth quarter, as mopping up was well underway before the final buzzer announced the coming of the crown.

“It was like a party in the locker room. We’re so happy,” said Lady Panthers senior Johnique James. “It feels great — something that hasn’t happened in a very long time.”

The victory locks up the Lady Panthers as a No. 1 seed in the postseason tournament beginning next week. They will enjoy a first-round bye and host their first contest on Friday, Feb. 23, against the winner of the matchup between South Jones and Stone County in the first round of the 5A playoffs Tuesday night.

Ole Brook junior Tamia Stallings said the team would be back to business after tonight’s celebration.

“It feels really good. The locker room was loud, intense, fun — but now it’s playoff time. We have to work hard and play our best,” she said.

Coach Preston Wilson said his girls are in great position for the start of postseason play.

“We were able to get our younger players some good tournament experience tonight, and that’s always good,” he said. “We’re healthy, we get a few days off. We just have to make a few adjustments, but we’re in good shape.”