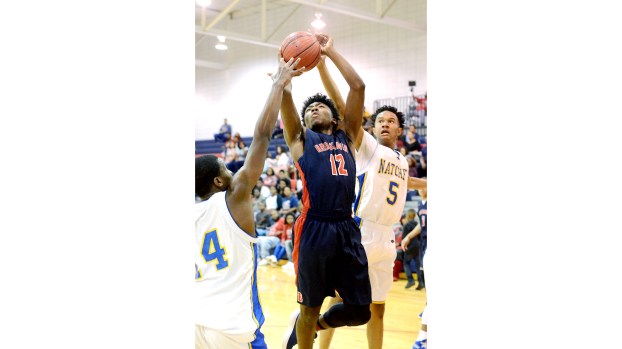 He had pulled out his shirttail to wipe the tears off his face. He caught his breath, calmed down and walked out of the locker room like a man, but his red eyes gave it away.

After the Panthers lost to Natchez 61-57 in the Region 6-5A tournament’s consolation game Friday night, he had dribbled his last basketball for the red and blue. Brookhaven had to win for a chance to go on the road in next week’s postseason tournament, but the loss ended the season and closed the book on Marshall’s career at Ole Brook.

“It was a good time. I will miss everything about it,” he said, searching for words. “I just don’t know. I can’t talk right now.”

Marshall had nothing to hang his head about. He led his Panthers with 18 points and was the driving force of a raging second-half comeback attempt that came within a couple possessions of taking the lead in the final two minutes.

It was Marshall who popped in a three-point bomb to close the score to 51-50 with 2:11 remaining in the game, bringing the gymnasium to life after Brookhaven had trailed all game and been embarrassed in the first half.

The teams traded possessions over the next 60 seconds with the game in the balance, but Ole Brook’s opportunity slipped away on a half-court turnover with 32 seconds remaining that allowed Natchez to push the score back out to 59-55. With 20 seconds remaining and the chance fading out, Marshall took responsibility into his own hands and drove into the lane for a layup, but it didn’t fall.

The comeback was an impressive attempt that could have altered the game had it started sooner. The Panthers were bewildered in the first half as the Bulldogs ran the floor and owned the baskets.

Ole Brook couldn’t seem to get started, scoring only three points in the first quarter while Natchez dropped in 15. The Bulldogs led 28-9 at one point in the second quarter before the Panthers closed it up to trail 32-15 at halftime.

The locker room adjustments made Brookhaven a new team, and they promptly dominated the third quarter 17-9 to trail by a manageable margin — 41-32 — at the start of the final period. The Ole Brook offense reached great heights in the final eight minutes, throwing in 25 points.

But Natchez’s 20 was good enough. Barely.

“We couldn’t have done anything different in the second half,” Marshall said. “They didn’t take away anything we did out there.”

In a game decided by a handful of late possessions, mistakes were magnified. Ole Brook grabbed a competitive 40 rebounds and took 12 steals, but managed to dish only six assists. The Panthers were whistled for 21 personal fouls — Marshall collected four and was not on the court for part of the comeback attempt.

The team’s 19 turnovers were crippling, as was its 13 percent total shooting three-pointers. The Panthers fired 23 shots from beyond the arc. Senior Keith Robinson was the only player to connect, hitting three of nine for 33 percent.

Two of his deep shots came in the fourth quarter and were critical pieces of the Panthers’ comeback attempt. He fired them up fearlessly, doing everything he could to keep his team’s season alive.

“I was trying to leave it all out there,” Robinson said. “I just didn’t want to go home this early. Playing basketball for Brookhaven has been one of the best experiences of my life, a great four years.”

Robinson was somber after the game, as were all the Panthers. Head coach Marcus Flippin quickly made peace with the season’s end and maintained his cool, as he’s done all season, while offering his thoughts on his first season in charge of the Panthers.

“Every coach realizes, most of the time, what a team’s limitations are,” Flippin said. “We don’t shoot the ball well enough. No matter how hard you play defensively, the ball still has to go in the basket. We’ve had a terrible time shooting all year. It goes back to when they first made the rules for basketball — the team with the most points wins.”

Those same struggles were present against Natchez. Ole Brook made 14 of 30 free throw attempts on the night for 47 percent. Junior Lafollette Bogan, normally a sniper good for 60 percent at the free throw line, missed his first seven in a row. He later recovered and hit five straight in an 11-point fourth quarter.

“I think we were a little nervous about the game,” Flippin said. “It had to be a mental thing. We tried too hard. Tried too hard.”

The Panthers lose only three seniors to graduation, and a young team will be more mature next fall for Flippin’s second season at BHS.

“We had a tough season, but we’re going to come back. We got a lot of young guys playing, and they got some good experience, and we’re developing some good chemistry with our coach,” he said. “I love coach Flippin. He’s taught me a lot, and I’m looking forward to next season.”

Bogan backed up Marshall’s 18 points with 16 of his own. Robinson scored 13, while Hilbert and sophomore Byrion Robinson scored four points each. Sophomore KaDarrius Wells scored two.

Natchez will head to the 5A playoffs to face Long Beach Tuesday night.

Brookhaven’s Lady Panthers capture Region 6-5A championship in 61-37 win over Wingfield They carried the trophy, golden and slender, into... read more